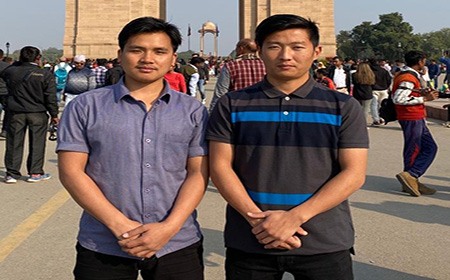 Staff Reporter
ITANAGAR, Feb 13: Two Arunachalee students – Ajeet Pordung and Jimmy Sonam – are representing India at the Asia Youth International Model United Nations (AYIMUN), scheduled to be held in Malaysia from 15 to 18 February.
Pordung is a law student at Delhi University and chairman of NGO Tassar Education and Charitable Trust, which provides scholarships to students from the Northeast for undergoing UPSC coaching in Delhi.
Sonam is an MPhil student in the anthropology department of Rajiv Gandhi University, Rono Hills. Both Pordung and Sonam are from East Kameng district.
Reportedly, 570 delegates from 52 countries, including India, are attending the four-day seminar in Kuala Lumpur.
Being organised by the International Global Network, the event is aimed at providing a platform to future diplomats to understand global issues and policies, debate, and share perspectives from different backgrounds and ethnicities.
It provides an opportunity to the participants to directly represent their assigned countries as official delegates, and is designed to recreate the atmosphere of a United Nations conference.