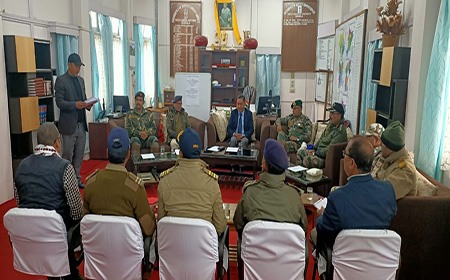 BOMDILA, Feb 13: West Kameng DC Karma Leki reviewed the security status in the district during a meeting with representatives of the Indian Army, paramilitary forces, the BRO and the district police here on Thursday.
The meeting was also aimed at strengthening the bonhomie between the civil and the armed forces, and taking up issues which needed the intervention of the district administration.
The DC urged the Army, the ITBP, the SSB and the BRO to be “an equal partner in motivating the youths and nation-building.”
Brig KD Jaspal said the Army would take up issues related to education, skill development and promotion of tourism in the district, while Col RK Chauhan informed that local youths are being trained so that more youths from the area are selected in the Army.
Officers of the ITBP, the SSB and the BRO also expressed their commitment to work for the overall development of the district and to assist in ensuring peace and tranquility.
The district police reiterated the requirement of a police station in Kamengbari.
Liaison officers were appointed from the Army, the paramilitary and the BRO to facilitate direct communication with the district administration and vice versa.
Other matters, such as the Dirang bypass, the progress of work on the BCT road, coronavirus, and the census operation were also discussed. (DIPRO)