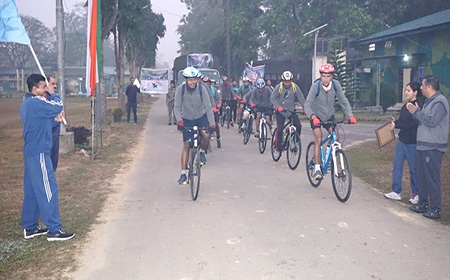 NEW DELHI, Feb 14: A bicycle expedition which was organised to commemorate the supreme sacrifice made on 4 November, 1977, by the air warriors of the Air Headquarters Communication Squadron (AHCS) – a unit under the aegis of the western air command of the Indian Air Force (IAF) – culminated here on Friday, a defence release said.
On the ill-fated day, five air warriors of the IAF’s elite communication squadron sacrificed their lives while saving the lives of the then prime minister Morarji Desai and other VIPS in the crash landing of a TU-124 jet in Tekela gaon in Assam’s Jorhat district while flying from Delhi.
The pilots were Wg Cdr Clarence D’Lima, Wg Cdr Joginder Singh, Sqn Ldr Mathew Cyriac, Sqn Ldr VVS Sankar, and Flt Lt OP Arora.
The expedition was flagged off from the crash site in Jorhat on 27 January by AHCS Commanding Officer, Group Captain Saurabh Shiv and former MP RK Khrimey, who was among the survivors of the crash.
The team, led by Wing Commander Irfan Washid Khan Jarial, included Sqn Ldr A Sahu and 11 other air warriors of the unit. It traversed through five states, cycling a distance of approximately 2500 kms.
Along the route, the team interacted with local youths to create awareness about the IAF.
The team was flagged in at the IAF station in Palam by the commodore commandant of the squadron, Air Commodore SP Singh, on Friday, in the presence of Air Cmdr Alok Sharma and the air officer commanding of the Palam IAF station, besides Khrimey and veterans of the unit.