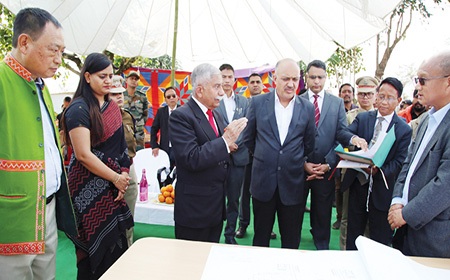 NIGLOK, Feb 14: Governor BD Mishra on Friday inspected the proposed permanent site of the Sainik School here in East Siang district.
Mishra, who has been making efforts to start a girls’ wing at the school, said the school should have state-of-the-art amenities for the students.
“Every infrastructure must be modern, environment-friendly, and add to the standard of this secured Sainik School campus,” he said. “The campus must be laid out exactly as per the drawings approved by the user.”
The governor, who was accompanied by Chief Secretary Naresh Kumar, Education Secretary Niharika Rai, the Sainik School’s Principal, Lt Cdr AK Dutt, and others, interacted with the students, and advised them to “imbibe academic inquisitiveness, discipline, punctuality, scientific temper, hard work and physical fitness.”
He advised the school’s management and teaching staff to put in their best “to produce the best students among all the Sainik Schools of the country.”
Local MLA Ninong Ering, Deputy Commissioner Kinny Singh, PWD Central Zone CE Markar Bam and other officers were also present. (Raj Bhavan)