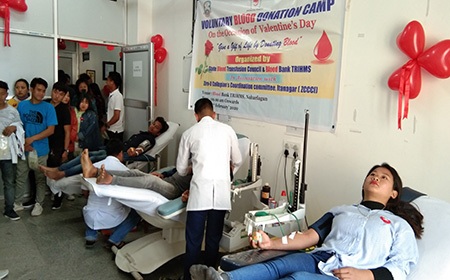 NAHARLAGUN/ITANAGAR, Feb 14: Eighty-one units of blood were collected during a voluntary blood donation camp organised at the TRIHMS by the State Blood Transfusion Council (SBTC) and the TRIHMS’ blood bank on Friday to mark Valentine’s Day.
Themed ‘Give a gift of life by donating blood’, the camp was organised in association with the Ziro-II Collegian Coordination Committee, Itanagar, and saw the participation of a large number of students from different colleges and student coordination committees in and around the capital complex.
Speaking to this daily, SBTC Deputy Director Dr Nabam Budh said the annual blood requirement in the state is very high at around 18,000 units.
“However, blood collection at the 12 functioning blood banks is very low compared to the overall requirement,” he said, adding that the daily requirement of blood at the TRIHMS and the RK Mission Hospital (RKMH) alone is around 15-20 units.
Urging the youths of the state to voluntarily donate blood and save precious lives, Dr Budh said while donating blood doesn’t harm anyone, it makes the donors healthier.
Meanwhile, the Arunachal Voluntary Blood Donor’s Organization (AVBDO) and I Love Arunachal organised a voluntary blood donation camp at the RKMH to mark the day, in collaboration with the Arunachal Pradesh State AIDS Control Society.
“This is the 55th time that I have donated blood,” said AVBDO president Ramesh Jeke. He said the majority of the blood donors at the camp were females.
Stating that there is increasing demand for blood at the hospitals, he appealed to the people, especially the youths, to donate blood whenever and wherever possible.
Fifty-seven units of blood were collected at the camp at RKMH.