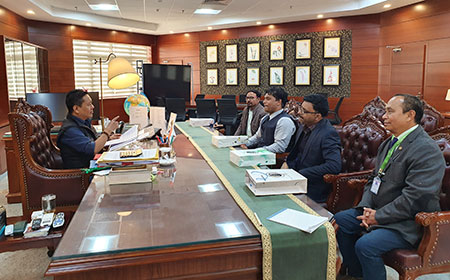 ITANAGAR, Feb 18: Legislative Assembly Speaker PD Sona urged the officials of the Arunachal Pradesh Rural Bank (APRB) to open a branch of the bank in Monigong-Pidi administrative block in Shi-Yomi district.
Sona, who represents Shi-Yomi district as MLA, said during a meeting with the officials of the bank here on Tuesday that the people of the Monigong-Pidi administrative block have been facing hardships due to the unavailability of financial institutions in the area.
“They have to go either to Mechukha or Aalo for all kinds of banking needs,” the speaker said.
He said that opening an APRB branch in Monigong-Pidi would not only facilitate hassle-free banking services to the public but also help in the economic growth of the area.
The speaker requested the APRB officials to send a team to Monigong-Pidi to assess the feasibility of implementing his proposal, and assured to extend all possible help from his end in opening the branch.
APRB Chairman Deepak Kr Gupta briefed the speaker on the technicalities and other procedures for opening a bank branch. The APRB currently operates in various places across the state, facilitating banking services to the masses, he said, and informed about a new branch being opened in Nacho, in Upper Subansiri district.
Gupta gave assurance that an APRB team would soon be sent to explore the feasibility of opening a branch in Monigong-Pidi. (Speaker’s PR Cell)