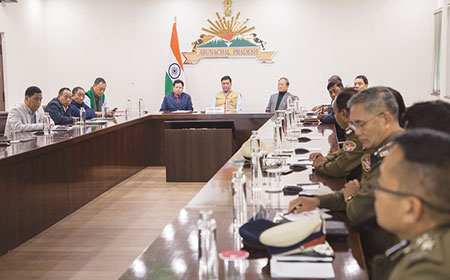 ITANAGAR, Feb 19: Chief Minister Pema Khandu said that Police Commissionerate system is being introduced in state Capital.
During an all party meeting here on Wednesday , the chief minister said the commissionerate system is being introduced to improve law and order in the state as part of police reform measure.
He expressed confidence that once the system is introduced in the capital there will be visible change in the law and order situation within a year.
The commissionerate system will enable effective policing in a complex area such as Itanagar, which is growing at a fast pace with diverse culture living side by side, said the chief minister. He said “Itanagar-Naharlagun is the face of our state. So it is necessary to maintain peace and order in the capital complex to achieve meaningful development”.
Also speaking on the occasion, Home Minister Bamang Felix said the new system will provide better accountability as responsibility will be fixed directly on the police department, eliminating all the chances for blame game between civil administration and the police in the event of any policing failure. He also said the new system will enable increased number of higher officers for intensive policing in dense urban areas.
Earlier, explaining the rationale for a commissionerate system in the Capital Complex, Director General of Police RP Upadhyaya said the new system will enable swift and unified action giving no chance for delayed action.
The proposed new police command system in Capital Complex will be headed by a commissioner of Police (DIGP or higher rank), to be assisted by numerous DCPs (SP rank) and ACP (DySP rank). The DCPs will head different police functions, such as traffic, crime, security, law and order etc.
Representatives from different political parties – Indian National Congress, Janata Dal (United), National People’s Party, People’s Party of Arunachal and independent candidate expressed their views on the commissionerate system and extended support for its implementation.
The meeting was also attended by the BJP state party president Biyuram Wahge and APCC president and former CM Nabam Tuki.
The all party meeting also discussed on possibilities for non-party system in the upcoming Panchayat elections. The chief minister also said non-party system will enable best leaders to be given chance and preserve community camaraderie. (CM’s Media Cell)