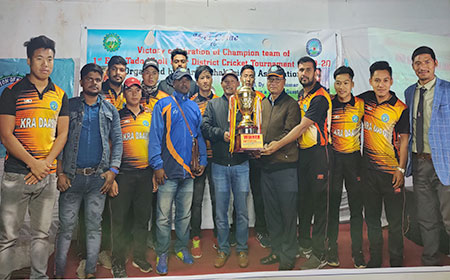 PALIN, Feb 25: Tado Kholi Inter-district Cricket Tournament (2019-20) champion, the Kra Daadi cricket team, was felicitated by the Cricket Association of Kra Daadi District at a function here on Tuesday.
Kra-Daadi became champion after they defeated Itanagar by 35 runs in the final.
The function was attended by local MLA Balo Rajo, Kra Daadi DC S Miji, and Lower Siang DC AK Singh.
Congratulating the team members, Raja offered his continued support for the team in whatever capacity he could in the future too.
He commended the efforts of District Sports Officer Tage Taki “or all-round development of sports in the district.”
DC Miji expressed hope that the team would achieve more such success in their future endeavours.
CAoKDD president Tamchi Dollee sought support from all stakeholders to develop a cricket ground in the district. (DIPRO)