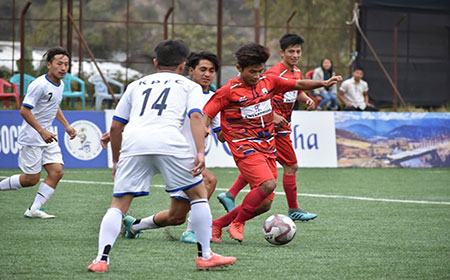 CHIMPU, Feb 25: Keyi Panyor FC (KPFC) suffered their fourth straight loss in the Indrajit Namchoom Arunachal League (INAL) after they were defeated 4-0 by Todo United here on Tuesday.
Todo United bounced back strongly in Tuesday’s match after their 5-1 defeat at the hands of Capital Complex in the previous match.
Tapi Hakhe (26th min), Kamin Darin (43rd min), Tarh Dolu (74th min) and Pill Takar (90+3 min) scored for the winning side to stay in the top four.
KPFC have lost all the four matches played so far, and are virtually out of the league contention. They will meet Capital Complex in their last league level match on 4 March.
Todo United have also played an equal number of matches, and won two, lost one, and drew one. They will meet Kargu Kardi FC on 1 March.
The next match will be played on 28 February between Gora Makik SC and Kargu Kardi FC, informed the APFA’s competition director, John Neelam.