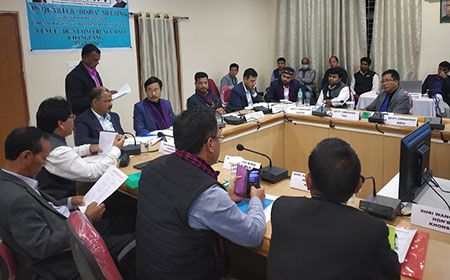 CHANGLANG, Feb 25: The progress of various ongoing government projects were discussed during a meeting of the District Development Coordination and Monitoring Committee (DISHA) at the deputy commissioner’s conference hall here in Changlang district on Tuesday.
Discussions on proper implementation and speedy completion of PMGSY, NSAP and credit-linked subsidy schemes, along with projects under the agriculture, horticulture and allied sectors were the main highlights of the meeting.
Officials from all implementing agencies made PowerPoint presentations on the schemes.
MP and DISHA Eastern Zone Chairman, Tapir Gao, who chaired the meeting, promised to take up all issues raised during the meeting at the appropriate level.
Earlier, Legislative Assembly Deputy Speaker, Tesam Pongte, urged the DISHA chairman to “take up all issues which are hampering development activities at the central level.” He also requested the chairman to “take up the pending issues of Sainik Schools and a sports academy in the eastern districts.”
The meeting was attended by MLAs Phosum Khimhun, Laisam Simai, Tanpho Wangnaw, Gabriel D Wangsu, Wanglam Sawin, Chakat Aboh, and Kento Rina.
Changlang DC RK Sharma, Lohit DC Prince Dhawan, the DCs of Tirap, Longding and Namsai, and other government officers from the eastern zone also attended the meeting. (DIPRO)