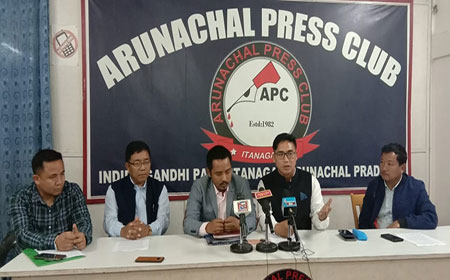 Staff Reporter
ITANAGAR, Feb 25: The Jigo Yego Students’ Union (JYSU) has demanded that the state government immediately hold talks with the government of Assam over the repeated harassment and assaults on Arunachalees travelling through Assam, else witness a ban on the Malini Mela scheduled to be held in Likabali in March.
Addressing a press conference here on Tuesday, senior public leader Modam Dini, who accompanied the JYSU, said that he, his younger brother Henken Dini, and their wives were assaulted and abused by one Nihar Sensua and his friend in an incident of road rage while they were on their way to Dibrugarh, Assam, on 18 February.
The incident reportedly occurred at Borpathar, near Dibrugarh University, at around 6.30 pm on 18 February when the commuters from Arunachal were on their way to Dibrugarh to visit a relative in a hospital.
Modam said that when the matter was taken to the Borborua police station, “the officer-in-charge, Manoj Borua, was uncooperative, did not file an FIR, and took the side of the duo.”
“Instead of helping us, the officer-in-charge continued to pressure us to pay the duo a sum of Rs 1,40,000 for the damage to their vehicle, when they had hit our car. I was forced to pay a sum of Rs 33,000 to both of them by the OC,” Modam claimed.
However, Modam said that he later met with the Dibrugarh SP, who helped him get the money back and issued a strict warning to OC Borua.
JYSU president Nyape Taipodia called on the state government to hold serious talks with its Assam counterpart to suspend the Borborua police station OC, arrest the persons involved in the assault, and discuss the matter of repeated attacks on Arunachalees visiting Assam, especially those who travel for medical-related works.
It said that the union and the people of Likabali in Lower Siang would impose a ban on the celebration of the Malini Mela if the state government fails to meet its demands.
The JYSU had imposed a 12-hour Likabali bandh on Monday to protest the attack, and demanded concrete steps against repeated harassment meted out to people of Arunachal travelling through Assam.