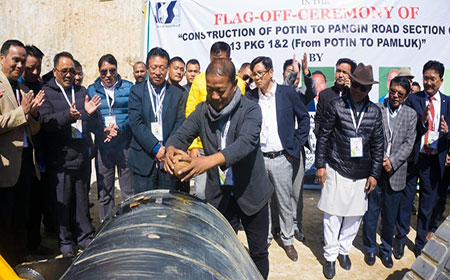 ZIRO, Feb 29: After nearly 12 years of wait, the construction of the Potin to Pangin road section of National Highway-13 under package 1 & 2 (From Potin to Pamluk) was officially flagged-off at the ANYA Gate here in Lower Subansiri on Saturday.
Inaugurating the construction of the vital road, Home Minister Bamang Felix informed that the Pema Khandu-led government has approved additional Rs 62.48 crore for payment of compensation as per the fact finding committee report, and said that “those found involved in compensation scam will not be spared and punished as per law.”
“As per the fact finding committee’s report, compensation amount below Rs 5 lakh will be paid before the 15th of March this year. For those who have to receive compensation of over Rs 5 lakh, 55 percent of compensation amount will be paid within the month of March, 2020. The remaining amount will be paid on or before the month of August this year,” he informed.
He also directed the Lower Subansiri Deputy Commissioner to submit the details of the amount to be paid to genuine land affected people within 12 hours as per the fact finding committee report.
As Felix cautioned government servants and the public against indulging in any unlawful activities related to the highway, the Home minister also appealed to the Tanw Supun Dukun, Nyishi Elite Society and frontal organizations of both the Nyishi and Apatani communities to play active roles for timely completion of the highway project.
He also appreciated Education Minister Taba Tedir and former Apatani Youth Association president Taku Chatung for surrendering their compensation amo-unts for the cause of the Trans-Arunachal Highway.
In the meantime, Tedir requested the contractor of Package 1 (Potin to ANYA gate) to mobilise T&P at the earliest and appreciated the progress made by the contractor of Package 2 (ANYA Gate to Pamluk).
All the ministers and MLAs also expressed serious concern over the 12-year delay in the construction of the TAH. They sought early completion of the road and appealed to the public of both Ziro-I and Ziro-II to support the project.
While TSD secretary Pura Tago assured the district administration of the organisation’s support for timely completion of the highway, he also expressed dismay that no notice has been served to land-affected people by the administration on the road construction yet.
Tourism Minister Nakap Nalo, Education Minister Taba Tedir, Agriculture Minister Tage Taki, along with MLAs Tarin Dakpe, Jikke Tako, Nyato Rigia, Taniya Soki and Rode Bui and community based organisations also witnessed the flag-off event. (DIPRO)