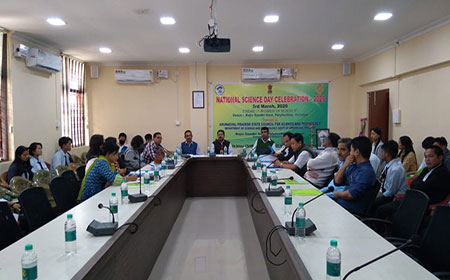 ITANAGAR, Mar 3: The National Science Day- 2020 was celebrated here at the Rajiv Gandhi Government Polytechnic (RGGP) on Tuesday.
Organised by Arunachal Pradesh State Council for Science and Technology, Department of Science & Technology and the RGGP, the event was held with the theme ‘Women in Science’.
National Science Day is celebrated every year on 28 February in the country to celebrate the discovery of the ‘Raman Effect’ by India’s Nobel laureate and scientist CV Raman. The programme was rescheduled due to the capital bandh.
In his address, RGGP Principal Dr AK Tripathy urged everyone, especially women, to take up science and research activities while stating that “women are generally more patient, composed, hardworking and sincere.”
State Council for Science and Technology Deputy Director (Technical) Debajit Mahanta urged the participants to grab the opportunity and actively participate in such programmes.
During the technical session, Scientist from the State Remote Sensing Application Center, Itanagar, Swapna Acharjee deliberated on the topic ‘Women in Science – Opportunities and Challenges’, while North East Institute of Science and Technology Principal Scientist Chandan Tamuly spoke on the importance of celebrating National Science Day.
State Council for Science and Technology Deputy Director (Technical) P Lombi and local coordinator and HoD, Science & Humanities, RGGP Jitu Saikia also spoke on the occasion.
Later, prizes and certificates were awarded to the winners of debate and quiz competitions.