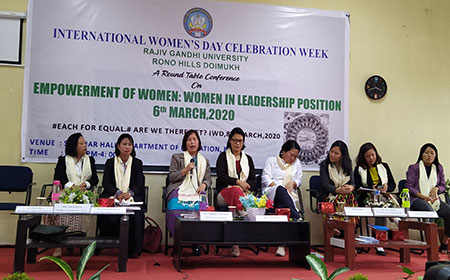 RONO HILLS, Mar 6: The International Women’s Day (IWD) celebration week began at Rajiv Gandhi University (RGU) here with a roundtable discussion on ‘Empowerment of women: Women in leadership position’, organized by the university’s Women’s Studies & Research Centre (WSRC) on Friday.
The IWD’s theme this year is ‘Each for Equal’.
The programme featured intensive discussions on the role of women leaders in politics, a discourse on property rights of tribal women and girl children, indigeneity, uniform civil code, and dissent.
Speaking on the occasion, WSRC Director, Prof Elizabeth Hangsing, expressed hope that the discussions “would usher in a new and positive thought process through the experiences of the resource persons in various fields at grassroots level.”
Pro-Vice-Chancellor, Prof A Mitra, highlighted the “statistical percentage of women’s participation in different spheres in India,” and emphasized on “women’s contribution in the overall development and empowerment.”
Prof Jumyir Basar from RGU’s Arunachal Institute of Tribal Studies highlighted “the poor scenario of participation of women in politics,” and dwelt on “the dilemma in relation to women’s efforts in bringing about change in the traditional rules, and on the other hand adhering to keep the traditional rules intact.”
APSCW Chairperson Radhilu Chai Techi spoke on the pros and cons of codifying the customary laws.
She said codifying the customary laws would not be of any good “as many of the terms in the tribal customary laws are not women-friendly.”
Techi also demanded that the “stigma” that women are incapable of taking on leadership roles be removed.
She said the younger generations need to participate in women empowerment discussions “to facilitate concrete recommendations to the government for the welfare of the people as a whole.”
Advocate Kani Nada Maling from the Arunachal Pradesh Women’s Welfare Society spoke on “the challenges of the uniform civil court in present-day context,” and said that “when it comes to recommending anything to the government, and also consultations and meetings involving various community-based organizations, stakeholders, experts should be present during such deliberations and discussions.”
Nyishi Nyem Acham (NNA) general secretary, Nido Savita, spoke on the role of the NNA as an independent, autonomous community-based organization of the Nyishi community.
The team led by women stressed on the belief that women can work as well as men, “without being under any influential banner,” and emphasized on the sacrifice made by women in leadership positions.
A rigid patriarchal mindset is detrimental to the growth of future generations, they opined.
The AAPSU’s women’s wing convenor, Bengia Mepu, said that “women can be equally a part of any decision-making in the presence of the male counterparts,” and that the best decisions are taken when agreed on by all, irrespective of gender.
APSLSA project consultant, Marie Riba, urged all to fight for their rights and to stand up for the rights of women. She also spoke on the relevance of nonviolent mediums of protest.
State BJP secretary, Junty Singpho, spoke on women leadership in the BJP in the context of Arunachal. She urged “the female population to come forward and contribute as much as they can in the political arena.”
APMCC general secretary, Toko Mina, encouraged women to “think beyond political arena and truly think for your rights, legal rights, integrity and equality.”
She said that “if one has the eligibility, qualifications and determination, one can stand alone and yet represent an army.”
The programme concluded with an open discussion between the resource persons and the participants comprising faculty members, students and scholars of RGU.
Among others, RGU Registrar, Prof Tomo Riba, Joint Registrar, Dr David Pertin, and RGU IQAC Director, Prof RC Parida attended the programme.
The NABARD’s regional office (RO) in Itanagar also celebrated IWD.
Addressing the event, NABARD RO General Manager, Gopa Kumaran Nair, highlighted “the importance being given by NABARD to gender issues,” while APSCW Chairperson Radhilu Chai Techi urged women to be aware of the need for their safety and prosperity.
She enumerated various initiatives of the commission, including reservation for women, and advised women to “knock at the doors of the commission at times of distress and need.”
“It is high time for people to change their mindset and adopt a more educated, logical and reformist approach,” Techi said, and advocated 33 percent reservation in government jobs and 50 percent reservation in the panchayati raj institution for women.
SBI Itanagar Regional Manager, Arup Dutta, highlighted schemes such as Stand Up India, Mudra Yojona, etc, “which are empowering rural women economically.”
GPTI CEO Topu Basar Ete explained the training programmes and facilities available at the GPTI, APRB Chairman Deepak Kumar Gupta spoke about the bank’s credit service partnership with the ArSRLM, Apex Bank MD Tsering Thongdok encouraged SHGs to approach the bank for their requirements, and the ArSRLM’s State Mission Manager (FI), Hillang Tasab, highlighted the role of the organization and “the mutual role being played by NABARD and banks in the welfare of women.”
Members of more than 60 SHGs, banks, NGOs, etc, participated in the programme.
The NABARD also set up an exhibition of products by SHGs from across the state. More than 18 SHGs participated in the exhibition-cum-sale programme.
The Himalayan University celebrated IWD by enlightening its students on the issue of promoting entrepreneurship among women in Arunachal.
Addressing the students, keynote speaker Toko Mina said, “International Women’s Day encourages us all to reflect on the importance of gender equality, to celebrate the successes of women, and to acknowledge the work that is still left to be done.”
She also said that “entrepreneurship is not only about establishing a business venture but also about showing leadership.”
The other keynote speaker, Jarjum Gamlin Ete, shared her experience with entrepreneurship and said “the solution to unemployment is entrepreneurship.”
“Women have to face a lot of difficulties in establishing ventures in Arunachal as they do not have property rights in their parental and in-laws’ properties,” she said.
She also spoke about women-specific government schemes for establishing new ventures.
The university’s vice-chancellor, Dr HS Sharma, also spoke.