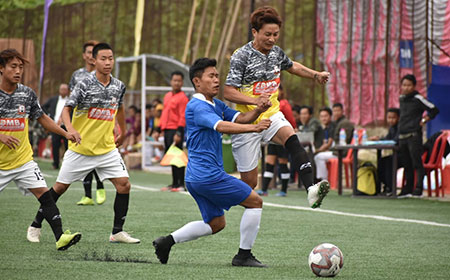 CHIMPU, Mar 8: Todo United FC (TUFC) scored two goals in both halves and defended until the end to rout 10-men Bamang Taji FC (BTFC) 4-0 in the second semifinal (eliminator) of the Indrajit Namchoom Arunachal League (INAL) here on Sunday.
Todo United got off to a flying start with a first-minute goal from Tana Hali.
BTFC were reduced to 10-men as goalkeeper Tadu Aja was sent off in the first half when he received a red card for handling the ball outside his penalty area to apparently block a clear goal-scoring chance.
Down to 10 men, BTFC pushed hard to equalize but failed to convert the opportunities.
In-form striker Tapi Hakhe netted the second goal in the 45+1 minute to give BTFC a 2-0 lead at the half-time break. Two more goals were scored in the second half – one each by Hakhe (47th min) and Sameer Pradhan (62 min).
Todo United will face Gora Makik SC on 11 March in the second qualifier, and the winner will face Capital Complex FC in the final, scheduled to be played on 14 March.