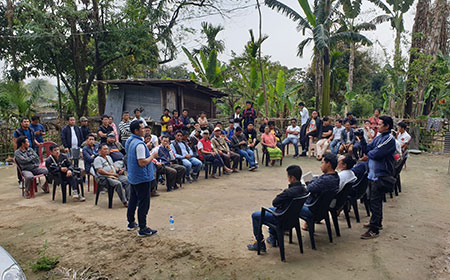 KIMIN, Mar 11: The Assam Forest Department officials have been alleged of obstructing the construction of the Pradhan Mantri Gram Sadak Yojna (PMGSY) road measuring 18.60 km from Lekhi village of Doimukh circle to Buka-II village in Kimin circle under Papum Pare district.
The officials from North Lakhimpur district allegedly stopped the ongoing road construction near Bogoli-Denka in Doimukh circle.
Following this development, members of the All Nyishi Youth Association (ANYA), along with officials of Kimin administration on Wednesday visited the area
to take stock of the situation. ANYA president Byabang Joram expressed concern over the interference by Assam officials in the ongoing work, which is being taken up inside the Arunachal territory.
“This is not the first instances of Assam forest official creating problem in the name of boundary dispute and reserve forest. People living along the boundary have been facing lot of trouble over the years. In Bogoli and Denka areas, Assam has occupied Arunachal’s land and constructed forest beat near the boundary. They are violating the status quo ordered by the Supreme Court,” said Joram.
Terming Assam as “the big brother,” he urged them to “treat Arunachal as the younger brother and shed the hostile attitude towards the state.”
Joram, along with a team of executive members of the ANYA and other organizations of Doimukh and Kimin circles also met the locals at Bogoli, Denka and Buka villages and assured them of their support. He said his team will apprise the state government so that work can be resumed at the earliest in the greater interest of the public.
The ANYA has called upon the state government to look into the issue of obstruction of PMGSY road projects in Papum Pare district, especially in Kimin and Tarasso circles, respectively.
Kimin Additional Deputy Commissioner Likha Tejji, officials of Rural Works department, and executing agency officials were also present during the visit.