ITANAGAR, Mar 15: Papum Pare has so far bagged 24 gold, 17 silver and 15 bronze medals in the 3rd State Olympic Games being held at different venues in the capital complex.
Sixteen more gold medals were secured by Papum Pare on the penultimate day of the Games on Sunday, bringing the total tally to 56 medals and maintaining their position at top of the medal table.
East Kameng were in the second place with 20 gold, nine silver and 16 bronze medals, followed by Kurung Kumey in the third place with 15 gold, 10 silver and 11 bronze medals.
Papum Pare pocketed 11 medals, including seven gold, in archery.
While the team comprising Taba Tagu, Tacha Akash, Gollo Tadik and Raha Mechung won the gold in 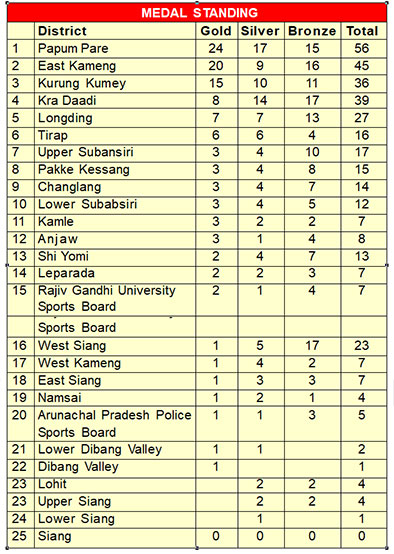