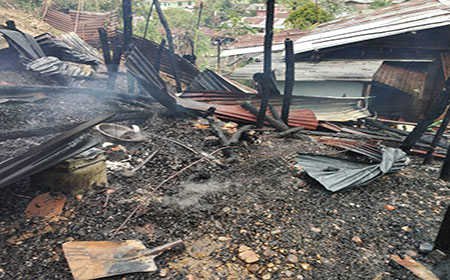 KARSINGSA, Apr 1: In a devastating fire mishap that occurred here in Papum Pare district on Wednesday, one female, identified as 35-year-old Chello Yapa, was burned to death along with the OBT house where she was residing.
Naharlagun Fire Station OC, Sujit Chakrabarty, informed that the incident occurred at around 9:40 in the morning.
On receiving information, a fire tender was rushed to the spot.
“As there was no traffic, the fire tender reached the accident site within 15 minutes. But due to the narrow road, the vehicle was not able to properly reach the exact spot; but still we stopped the fire from
spreading to the nearby houses,” Chakrabarty said.
The house belonged to Chello Taniang, who was away at the time of the incident.
“His wife, who was present in the house, was unwell and perhaps could not escape from the fire, leading to her death,” the OC said.
Officials of the Banderdewa police station also reached the spot and helped in dousing the fire.
A case of unnatural death has been registered at the Banderdewa police station. Naharlagun SDPO Riki Kamsi said the cause of the fire is yet to be ascertained and the matter is under investigation.