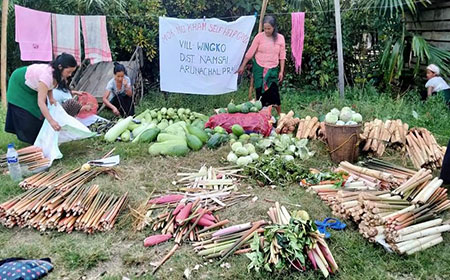 Staff Reporter
NAMSAI, Apr 2: Apart from receiving cash donations, the Namsai district administration (DA) has been receiving locally-grown vegetables and other items from several villagers of the district to help the DA in its fight against Covid-19.
As per reports, the administration has been receiving large quantities of vegetables from the locals. Several of the donated vegetables
are distributed among the labourers and poor families in and around the township.
Some villagers are also selling their produces to the DA for further sale at a fixed rate to the residents through cart pullers specifically engaged for the job.
Lathao-based Wanleng SHG and the Himalayan Foundation have also donated several quintals of vegetables and other items. Entrepreneur Chow Tenam Mein from Lathao recently donated Rs 1,00,000 to the DC’s relief fund.