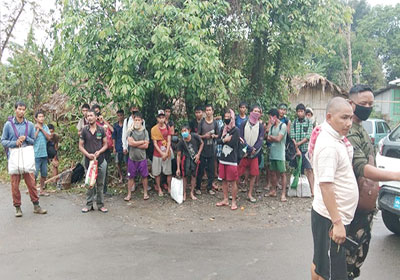 Staff Reporter
DEOMALI, Apr 18: Over 20 workers from a Ledo (Assam)-based colliery, who had recently entered here in Tirap district through the forests on the Assam-Arunachal boundary, have been sent back to Ledo by the police here.
The group of workers had reportedly been spotted by the residents of a village here, who later informed the police about their arrival.
DSP Topha Wangsu informed this daily on Saturday that the workers lost their jobs after the colliery in Ledo stopped its operations amid the nationwide lockdown.
“The workers stated that they had no money left for food and were compelled to leave for their native village in Karbi Anglong district of Assam. They decided to walk all the way from Ledo to Karbi Anglong on foot, taking unfamiliar routes through the forests. They lost their way and arrived at the village in Deomali instead,” the DSP said.
He informed that the workers had decided to take the forest route to reach their native village in order to avoid detection at the check gates in Assam and Arunachal.
“We could not arrest them, so our only option was to send them back,” the DSP said.