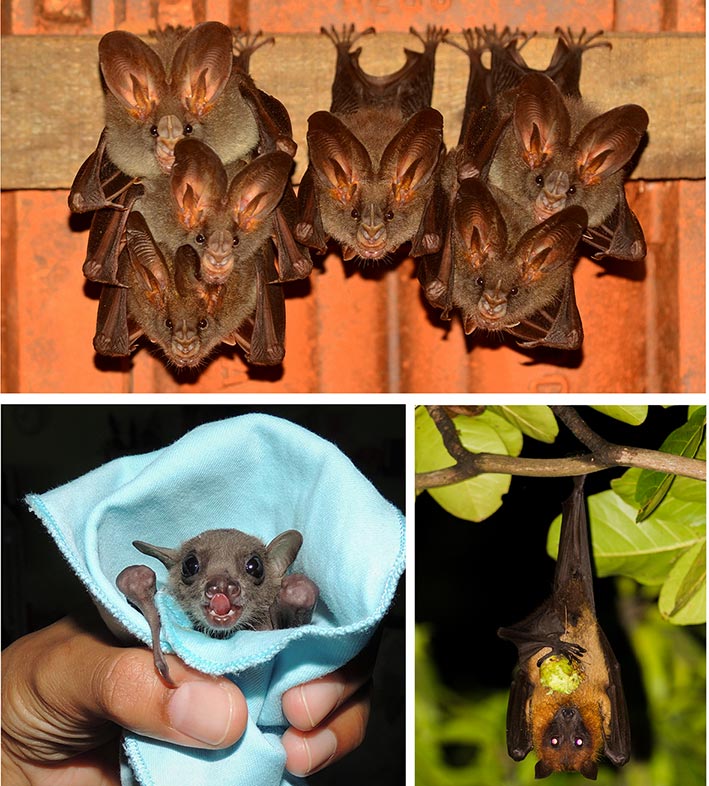 The world is currently battling a pandemic of unprecedented proportions, and bats have been prematurely implicated as the source of Covid-19.
Recent social media posts and unverified opinions about bats have led to widespread antipathy and fear in the general public. Incidents of the public requesting for removal of bats, destroying bat roosts, bursting crackers or smoking them out and sealing crevices where bats and their pups roost has increased in the last month, both in urban and rural areas in India.
In this challenging time, at least 64 South Asian scientists involved in bat conservation at different capacities have clarified that bats do not pose a direct human health hazard. On the contrary, they highlight the role of bats in improving the ecosystem, economy and human health. The following points are listed out in this summary and are elaborated.
1. The exact origin of SARS-CoV-2 or its precursor is not known. It is premature and unfair to blame bats or any other animal for the pandemic.
2. Scientists strongly suggest that it is highly unlikely for SARS-like viruses to jump directly from bats to humans. Also, there is no evidence of humans contracting coronavirus or any such viruses through the excreta of bats.
3. The recent report from the Indian Council of Medical Research (ICMR) on the discovery of bat coronaviruses (BtCoV) in two species of South Asian bats poses no known health hazard. The viruses found in the study are different from SARS-CoV-2 and cannot cause COVID-19.
4. Information on the current and past zoonotic disease outbreaks suggest that global wildlife trade and/or large-scale industrial livestock farming play an important role in such events. Killing bats and other wild animals, or evicting them from their roosts in retaliation is counterproductive and will not solve any problems.
5. Bats perform vital ecosystem services. They pollinate the flowers of some mangroves, and many other commercially and culturally important plants. Insect-eating bats are voracious eaters of pest insects in rice, corn, cotton and potentially, tea farms. Therefore, bats benefit ecological and human health, and provide intangible economic benefits.
6. The society currently needs more awareness about the bats around them, in addition to epidemiological facts, for a healthy coexistence. The scientists have therefore requested media houses and the press to consider possible negative impacts of their statements on bats and other animals before releasing them.
7. Lastly, the scientists have urged the governments of South Asian countries to strengthen the legal framework to protect bats in view of their ecosystem services and their slow breeding capacity.

On the origin and transmission of SARS-CoV-2

The actual origin of SARS-CoV-2 is highly debated among scientists. SARS-CoV-2 appears to be similar to another coronavirus, RaTG13, found in a species of bat called the the intermediate horseshoe bat (Rhinolophus affinis). However, a recent study has shown that RaTG13 and SARS-CoV-2 diverged 40-70 years ago from each other (a long timespan for the evolution of viruses) and hence the direct transmission of SARS-CoV-2 or its precursor from bats to humans is improbable. Moreover, the surface proteins of all SARS-like viruses found in bats cannot bind efficiently to the corresponding receptors of the human lung epithelium which makes direct transmission even more unlikely.
It is also highly improbable that the faeces of bats pose an immediate health risk to humans, and none of the previous zoonotic disease outbreaks, globally, show any evidence that they were caused due to contact with bat faeces. However, fungal infections (for example Histoplasmosis) may arise from unprotected contact with the faeces of any wild animal, so the following basic hygiene rules is advised.

None of the South Asian bats are proven to be natural reservoirs of SARS-CoV-2. Recently, a study by the ICMR found bat coronaviruses (BtCoV) in the common Indian flying fox (Pteropus medius aka giganteus) and the fulvous fruit bat (Rousettus leschenaultii). However, less than 5 percent of the screened samples contained this BtCoV and, as the study mentions, it is very distantly-related to SARS-CoV-2, and hence cannot cause COVID-19.

The real drivers of zoonotic disease outbreaks are predominantly manmade and many animals are carriers of viruses which could potentially spill over to humans. However, in recent times, only bats are unfortunately in focus for being reservoirs of viruses.
Like any other animal, bats are also reservoirs of many zoonotic viruses. However, being reservoirs does not mean that they spread diseases to humans. In reality, there is very little scientific evidence to prove bats have directly transmitted viruses to humans or caused outbreaks. The only known exception was the Nipah (NiV) outbreak in Bangladesh, which was caused through indirect contact between bats and humans.
As the cause of the outbreak was identified, it became easy to control and prevent subsequent outbreaks through basic precautionary and mitigation measures. Habitat fragmentation, global wildlife trade and wet markets, and large-scale industrial farming of wild and domestic animals have synergistic effects in bringing animals in close contact in unsanitary or stressful conditions — ideal conditions for the transmission and evolution of novel zoonotic viruses. Hence, during such outbreaks, there is no reason to single out or villainize only bats – whose benefits far outweigh the perceived negativity associated with them.

Bats are beneficial for humans and the ecosystem

Bats perform vital ecosystem services all over the world. Fruit bats help pollinate globally important cash crops like durian and agave (the plant that produces tequila). In South Asia, the culturally-significant tree mahua (Madhuca longifolia) appears to be predominantly bat-pollinated. In Nepal, chiuri (Diploknema butyracea), a multipurpose tree for the rural populace, is pollinated by bats.
Small fruit bats also pollinate the flowers of mangroves, which is an extremely productive ecosystem and also a natural barrier to coastal erosion and sea surges, thereby forming our first line of defence to natural disasters.
Insectivorous bats, on the other hand, voraciously eat pest insects that cause economic losses in rice plantations and also eat mosquitoes. For instance, bats are estimated to save 800 million USD for cocoa farmers in Indonesia and 22 billion dollars (annually) for corn farmers in the United States through pest control.
The importance of bats as seed dispersers, pollinators and pest controllers, particularly in the region’s important cash crops (like tea), is beginning to be unravelled. Epidemiologically, the unique immune system of bats could provide clues on handling viruses; therefore they should be seen as a solution to disease outbreaks, rather than the problem.

In view of the above points, the scientists say they firmly believe that the mass hysteria against bats is unfair and uncalled for.
The current pandemic is an outcome of the ongoing ecological destruction, increasing intensification of livestock farming, and wildlife trade. The scientists have urged people not to believe in news from unverified sources and cause harm to bats in retaliation. Likewise, they have requested the media to not oversimplify scientific evidence, to emphasize the role of humans in disease outbreaks and to highlight the importance of coexistence with bats in urban landscapes.
Bats have been living around humans for centuries and we have been disease-free wherever bats have been left to their business, the scientists say, adding that oversimplified or unverified information from the press not only creates unnecessary fear among the public but also pushes decades of conservation efforts backwards, which is far more destructive for the ecosystem.
In India, only two species (out of 128) are protected by law, while many other species are more endangered for lack scientific information. In Nepal, too, all 30 species are unprotected, including two species from the national red list, and the same is true for Pakistan. The scientists have urged the governments of these countries to reconsider and reinforce the laws governing bat conservation.
For more information write to Rohit Chakravarty ([email protected]), or Baheerathan Murugavel ([email protected])