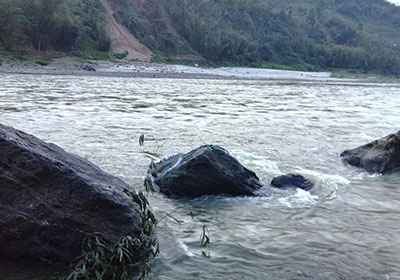 Staff Reporter
SEPPA, Apr 25: Two teachers from Wonderland Residential School, located in Type-II Colony in East Kameng HQ Seppa, are feared to have drowned in the Kameng river on Saturday afternoon.
The teachers have been identified as Atom Ratan (32), and Anand Topo from Mizoram. East Kameng SP Piyush Fulzele Nirakar has confirmed the incident.
Reportedly, the incident occurred at around 4 pm, when the two were laying a net for fishing in the river.
According to an onlooker, Topo was the first to drown, when he was attempting to place the fishing net from atop a big boulder. On seeing that Topo was drowning, Ratan reportedly dived into the river to rescue him, but both of them drowned.
Ratan was the managing director of Wonderland Residential School. He is reportedly survived by his wife and a daughter.
An unnatural death case has been registered at the Seppa police station, and the police have started a search operation for the missing teachers.
Earlier, on 19 April, a 12-year-old boy reportedly drowned in the Pacha river in Seppa. The search operation is still on downstream of the river to trace the missing boy.