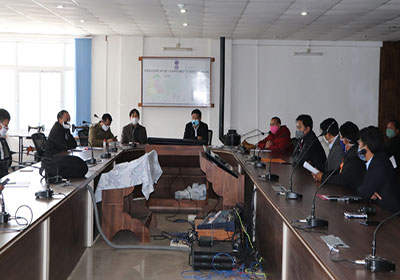 TAWANG, Apr 27: Tawang DC Sang Phuntsok convened a meeting with government officers and members of community-based organizations and student unions here on Monday to discuss the matter of funds to be transferred to those who are stranded outside the state due to the nationwide lockdown.
Addressing the meeting, which was attended by the Tawang SP, Manjushree Vidyapith Orphanage director Lama Thupten Phuntsok, and members of the ATDSU, the AMSU and the MMT, ADC Lobsang Tsering said that around 960 stranded persons from Tawang have registered online on the Google platform.
He said the administration would give priority to the stranded students, numbering 332, in the first lot.
“These 332 students will get an amount of Rs 3500 credited in their bank accounts by this (Monday) evening from the state government,” he said.
Lama Phuntsok requested the student leaders to help trace “the genuine students stranded outside, and also check thoroughly the list prepared by the district administration for any duplication.”
The students on their part requested the authority to consider the situation of the left-out students who couldn’t fill out the online registration forms due to various reasons.
The DC informed that the administration initially received a list of 1523 stranded people.
“But after de-duplication and contacting all the persons, a shortlist of 960 persons has now been prepared, and priority would be given to 332 confirmed students in the first lot,” he said.
He said the amounts for the next lot of stranded students would be ready for transfer within one or two days, after due verification.
“It is our collective responsibility to make sure that all the genuine persons get the benefit and no one should be left out; but at the same time there shouldn’t be any double payment made in a hurry,” the DC said.
He informed that a committee of officers has been formed to “examine and verify the genuineness of the applicants.” (DIPRO)