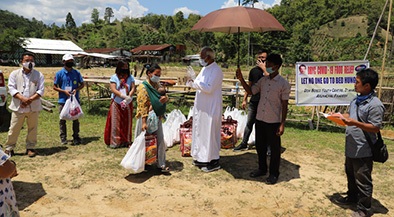 ITANAGAR, May 6: The Itanagar Doicesan Empowerment Association (IDEA) along with the Don Bosco Youth Centre (DBYC) provided dry ration to over 100 families of Batth, Moin Happa, Poma, Donyi and Dokum villages as part of Covid-19 relief.
DBYC director Fr Cyriac thanked the Bishop of Itanagar, Dr John Thomas for joining in the efforts of the DBYC and sponsoring food items for over 100 families.
During the two-day programme, Arunachal Pradesh Women’s Welfare Society secretary general Kani Nada Maling accompanied the team and distributed homemade masks to the children.
Meanwhile, a team of the Arunachal Pradesh State Commission for Women (APSCW) on Wednesday visited the shelter cum prayer centre initiated by the Deepak Nabam Ministry in Christ at Senki Park, Itanagar.
The team, led by APSCW Chairperson Radhilu Chai Techi, distributed surgical masks and ration items for the boarders of the shelter house.
There are currently 62 people with mental health issues, four old-aged persons and 24 drugs dependents staying or undergoing rehabilitation in the centre.
The team also donated some monetary assistance for medical treatment and urgent needs, according to an APSCW release.
Earlier, the team interacted with the chairman of the shelter house cum prayer centre.
During interaction, the chairman expressed his willingness to provide shelter to destitute men and women as he has been doing it out of his own interest to serve the society.
He also requested the government to implement the halfway homes policy to help rehabilitate mentally ill persons.