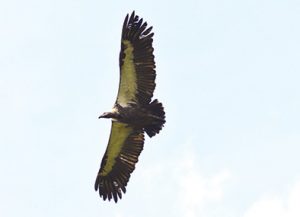 [ Dr Daniel Mize ]
ITANAGAR, May 9: Two critically endangered white-rumped vultures (Gyps bengalensis) were sighted for the first time at Ziro valley in Lower Subansiri district.
Amateur birdwatchers Koj Mama and Christopher Michi Tajo of Arunachal Pradesh Birding Club, who sighted the birds on Thursday, informed that two white rumped vultures (WRV) were roosting on a pine tree and thereafter hovered around the outskirts of Ziro valley for quite some time.
The bird species has been listed as critically endangered in the IUCN red list.
It is hard to say whether the sighting was a case of recce for suitability of habitat, availability of food, returning to valley, a vagrancy or temporary impact of the lockdown. Whatever may be the reason, the sighting is undoubtedly good news for ornithologists and conservationists.
Sightings of the WRVs had been reported on several occasions by an RGU research team from the Daying Ering Memorial Wildlife Sanctuary in East Siang and Namsai districts.
The WRV or oriental white-rumped vulture is the smallest among the gyps vultures with 75-95 cm body length and wingspan of 192 to 260 cm. Like other vultures, it has typical bald head and neck with blackish body and tail plumage, white neck-ruff at base of neck, white rump and back, and white underwing-covert.
The WRV is native to South and South East Asia. In India, it has been reported from most parts of the country, including Arunachal Pradesh and Indo-Gangetic plain, particularly from foot hills of the Himalayas.
In the early 1980s, the WRV was one of the most abundant birds, even considered as hazards for aeroplane navigation, but in the succeeding decades, 99 percent decline of population was observed from 1992-2007 and it is still continuously declining, though it has slowed down to some extent.
The catastrophic decline is attributed to non-steroidal anti-inflammatory drug ‘diclofenac’ used for treatment of livestock.
Besides, the destruction of habitat and use of insecticide and pesticide, particularly organocholorine are also responsible for the unceasing decline of the WRV population.
If ingested, even traces of diclofenac in carcasses of livestock lead to kidney gout and ultimately kidney failure in vultures.
Recently, the Birdlife International and IUCN estimated the population of WRVs to be around 2500-10000 individuals over the globe.
The WRV is enlisted in highest risk of extinction category ‘critically endangered’, since 2000, in IUCN red list of threatened species, listed in Appendix II of CITES and declared as scheduled I animal in IWPA, 1972.
Vultures play an indispensable role as a scavenger of carcasses of death and decaying animals. This unsavoury task of speedy and efficient disposal of carcasses by vulture not only save mankind from zoonotic diseases but also stop increase of other scavengers like rodents, dog, fox etc which will become carriers of pathogens.
Thus, vultures are called ‘natural sanitary workers’, and their extinction shall lead to human health tragedy. Despite being of high ecological importance, the WRV is just a step away from extinction and more is needed to be done for the bird.
Drugs toxic to vultures, like diclofenac, acelofenac, keptoprofen, carprofen etc, should be discontinued, and ex situ captive breeding should be done and masses should be educated to make them aware about the grave situation of vultures.
If vultures are not around, health tragedies may strike mankind. Amidst this alarming situation, sighting of a vulture at Ziro, in fact, is amazing news for thw whole nation, particularly for Arunachal. (Dr Daniel Mize is Assistant Professor at the Rajiv Gandhi University)