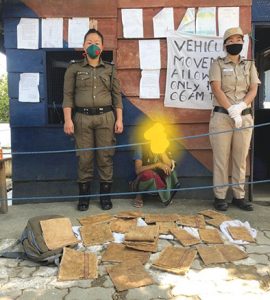 DEOMALI, May 9: A police team here has seized suspected opium smeared in cloth weighing approximately 2.3 kgs from the bag of one Chumyan Lowang of Deomali under Tirap district on Saturday.
The police team led by Deomali PS OC intercepted the suspect at the Deomali check gate and later seized the suspected opium in presence of the magistrate.
A case under section 18(C) of NDPS Act has been registered against her and others and an investigation is currently on.
As per preliminary investigation, it was revealed that the suspected opium was delivered to her by one Sentoi Hodong, alias Nokfoit, of Noklo village, Lazu, enroute to Dibrugarh, Assam.
Hodong was going to Dibrugarh in an ambulance bearing registration no. AR 13-3590 on medical ground. After crossing Hukanjuri check gate, Hodong told the driver to go towards Deomali as he had to collect some money for medical treatment.
They went just 1 km towards Deomali from the Khonsa- Joypur road and met Chumyan near the Deomali Bridge and delivered the bag. They had misused the ambulance and misguided the driver.
Meanwhile, Tirap SP Kardak Riba has appealed to the public not to misuse ambulances or any other government vehicle in committing crimes.
“When the frontline health workers and police are working for the safety of people, some anti-social elements are committing such crimes, which are condemnable. Such shameless miscreants are often found trying to defame and discourage the frontline warriors,” the SP said, adding that strong action will be taken against all law breakers.
TCL DIG Kime Kaming had also appreciated OC PS Deomali, his team and Tirap SP for their efforts in containing crime in the district. (DIPRO)