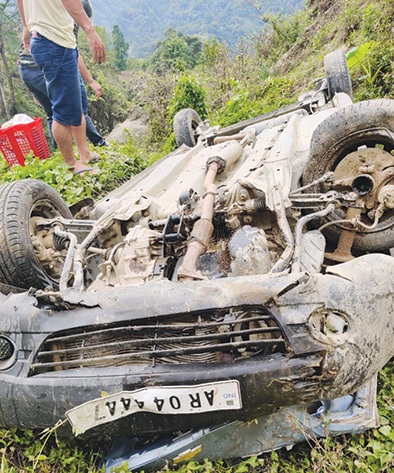 Staff Reporter
ITANAGAR, May 12: In a tragic accident, a 12-year-old boy, identified as Nani Byoda, died on the spot and his parents and sister sustained injuries when the Chevrolet car (AR-04-4447) they were travelling in fell off the highway into a deep gorge at Meb village, eight kilometres from Sagalee, in Papum Pare district.
The injured persons are Nani Tada (father), Nani Yakang (mother), and Nani Sunka (8).
The accident reportedly occurred at around 7.30 am, when the family was proceeding towards Rupa from Itanagar, informed Sagalee PS OC, Inspector Kime Kommo.
Nani Tada is a UDC in the PWD, Rupa, in West Kameng district.
The injured were brought to the community health centre in Sagalee, and later evacuated to Itanagar, the OC said.
A case – No 08/2020 u/s 279/304(A), IPC – has been registered at the Sagalee police station, and the body of the deceased has been handed over to relatives for the last rites after postmortem, the OC said.