KHARSANG, May 14: Delivering a major jolt to drug traffickers in the district, the Changlang anti-drug squad (ADS) seized approximately 3.1 kgs of opium from drug traffickers here on Wednesday. 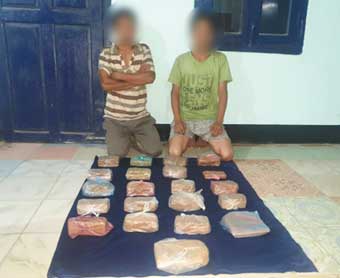 The seizure was made during a naka laid by the ADS – led by Inspector KM Das and Kharsang PS OC, SI Sunny Wangsu – along with local youths, at Jinney road, near the Namchik tea garden. The operation was supervised by SP Mihin Gambo and Miao SDPO Tasi Darang,
“During naka checking, the ADS intercepted two suspicious persons coming on a motorcycle from Taipong side,” the SP informed in a release.
“Personal search was conducted on the spot, and 21 packets of suspected contraband opium packed in a polythene packet, weighing approx 3.1 kgs, were recovered from their possession,” he said.
The duo on the motorcycle, identified as Ongthun Hakhun (27) from Longtom-II village, and Nengwang Hakhun (41) from Panchum village, both in Kharsang circle, revealed during spot interrogation that they had purchased the opium from an unknown Myanmarese person near the Indo-Myanmar border after a three-hour trek from Longvi village in Nampong circle.
The duo has been arrested, and a case under the NDPS Act has been registered at the police station here. Interrogation is underway.
Meanwhile, DIGP (TCL) Kime Kaming has lauded the ADS for the seizure of the drug and the arrest of the traffickers. He also commended the recent busting of a drug racket on the Margherita-Changlang route where several peddlers were arrested and contraband drug seized.
The DIGP also praised the Changlang police and the security forces for capturing several hardcore underground operatives belonging to outfits such as the ULFA (I), the NSCN factions, and the ENNG in the recent weeks.