PASIGHAT, May 14: Following the death of several wild boars in the district, forest officials here in East Siang said they suspect that the deaths are linked to African swine fever (ASF).
On receiving reports of the death of wild boars in Lidor Soyit, some 20-25 kms from here, on the upper ridge of the Sille river, a team of experts, including forest officials and veterinarians, visited the site on Thursday to ascertain the facts behind the deaths. 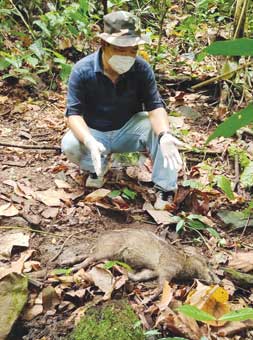 On reaching the spot, the team found six carcasses of wild boars – a female and a male adult each, one gilt, and three piglets.
Pasighat Division DFO (Territorial) Tashi Mize said “the reason behind the death of wild boars is suspected to be African swine fever.”
Samples from the carcasses have been collected and will be sent to a highly secured laboratory in Bhopal for further investigation.
Mize informed that a team comprising himself, Pasighat DVO Dr Talo Taggu, Disease Investigation Officer Dr Jikom Panor, Senior Veterinary Officer Dr Naku Taloh, RFO Ojing Jamoh, and veterinary and forest staffs reached the location and inspected the wild boar carcasses.
The DFO appealed to the public to “shun hunting and avoid eating of wild meat as much as possible.”
Following the report of the outbreak of ASF, several carcasses of wild boars were reportedly found in Upper Siang and East Siang districts.
Meanwhile, the team of officials expressed gratitude to local guides Tapor Dai and Atum Padung for guiding the team in the search for the carcasses.