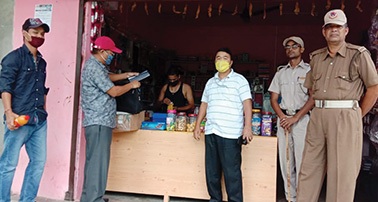 SUNPURA, May 22: Four shopkeepers were booked by the Lohit district administration constituted price monitoring team for violation of LM Act provisions during an inspection held at the market here on Friday.
The team which consisted of East Zone deputy controller Minte Siga and assistant controller legal metrology C.S Singpho had found that the four shopkeepers not only sold cold drinks beyond MRP but were also selling varieties of packaged items without the mandatory information as required under Legal Metrology (packaged commodities) Rules, 2011.
The team further cautioned the traders against selling commodities beyond MRP or the rates fixed by the district administration, which can attract legal action as per the provisions of law.