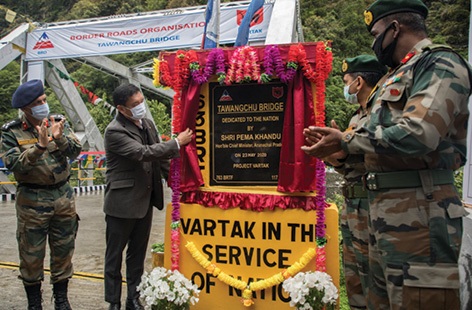 TAWANG, May 23: Chief Minister Pema Khnadu on Saturday dedicated two strategically important bridges-one over Tawang Chhu River in Tawang and another over Sukha Nallah in West Kameng, having the length of 50 mtr and 45 mtr respectively, to the nation.
Constructed by 117 RCC under the 763 BRTF, the bridges will facilitate faster movement of civilians and military towards the McMahon line.
Speaking after the inauguration of the bridges, Khandu lauded the Border Roads Organization (BRO) for securing the borders of the country and also providing employment and business opportunities to the locals through their investment in roads and bridges.
On fears being expressed by the locals on the possibility of virus entering Arunachal via central paramilitary forces, army and BRO, the chief minister said “these forces have their own SoPs, which are being followed strictly.”
In the afternoon, he inaugurated the police station at Jang ADC headquarters in the presence of Tawang MLA Tsering Tashi. (CM’s PR Cell)