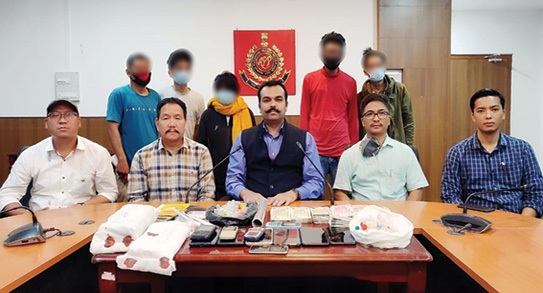 Staff Reporter
ITANAGAR, Jun 1: The crime branch special investigation team (SIT) has busted a major drug-trafficking racket operating in the capital complex by arresting five persons.
Addressing media persons, SIT SP Navdeep Singh Brar said that among the five arrested, two are IRBn constables. They have been identified as constables Tenzin Lobsang and Christoper Tair. The others arrested are Oyar Panor, Yayi Lendo Jomoh, and Rain Rai.
“The team seized 250 grams of heroin, syringes, a cash amount of Rs 3,33,600, mobile phones, and different bank passbooks with a balance of Rs 6,77,473,” Brar informed.
A case has been registered under the NDPS Act, and Inspector Padi Nikang will be investigating the case.
“Our team was able to apprehend the peddlers while working on various inputs on drug peddling in the state capital,” the SP said.
He said that the kingpins of the drug racket, Oyar Panor and Yayi Lendo Jomoh, were apprehended along with Rain Rai from Chandranagar here on 28 May. During investigation, they revealed the involvement of the police personnel, he added.
“A team of the SIT arrested the two IRBn constables from Jully and Chimpu area, respectively, based on the inputs provided by the arrested persons,” the SP said, adding that the team seized contraband substances, syringes and cash from them, too.
The five are in remand for further investigation.
Brar informed that the peddlers had obtained a fake medical emergency pass from the DC office, Itanagar, and had gone to Guwahati in an Innova car and brought the consignment. The drugs were sold in Jully, Chimpu, and Mowb-II areas of Itanagar.
He said that the special drive to eradicate drugs from the state capital is being undertaken under the guidance and approval from the DGP and Chief Minister Pema Khandu.
Brar also informed that the West Kameng police seized 610 kgs of cannabis from one Sang Jamtso, in an area between Balemu and Ankaling in Khalaktang subdivision, on 30 May.
Jamtso was on his way to Assam to sell the cannabis when the police arrested him, the SP said.
During interrogation, Jamtso revealed that he had collected the cannabis from Tsong Jaipu, in Waizer village in Khalaktang.
In the last two months, the district police have arrested nine peddlers across West Kameng for heroin trafficking. Investigation is underway to identify the others involved in the trafficking of cannabis, the SP added.