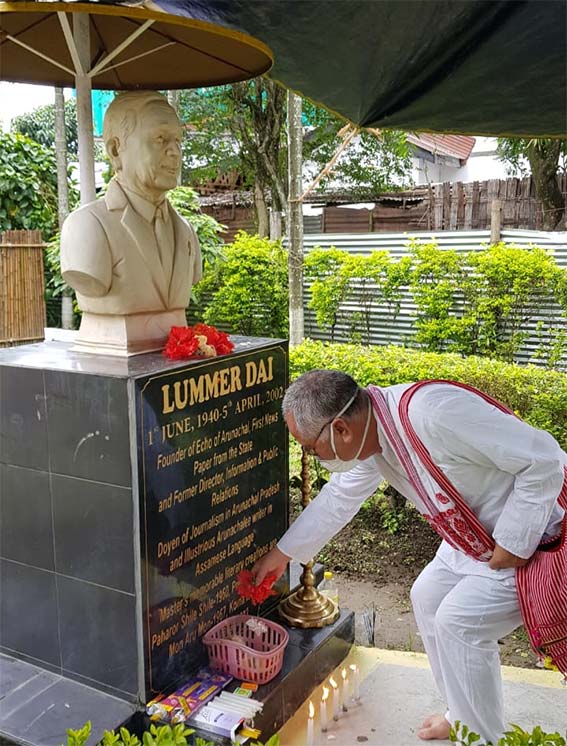 NAHARLAGUN, Jun 2: The Arunachal Pradesh Literary Society (APLS) celebrated the 81st birth anniversary of late Lummer Dai, the doyen of Arunachal literature and media, in a simple manner here on Monday.
On the occasion, a few members of the APLS, along with the late writer’s wife, Nani Dai, paid floral tributes to Dai’s statue at his samadhi sthall.
APLS president YD Thongchi announced the names of Chandra Borpatra Gohain and RN Koley as the authors who have been selected for this year’s Luminous Lummer Dai Award.
Gohain is a retired APCS officer who has written several short stories on the lifestyles of different tribes living in interior villages of Arunachal.
Koley has served as editor of the magazine Prayas. He has contributed in enriching Arunachal literature by editing various literary magazines and written various socio-anthropological books, short stories, novels and poems. He is also an active member of the APLS. He retired as assistant director of the research department.
The award, which consists of a citation, a plaque and Rs 10,000, will be conferred on them during the foundation day celebration of the APLS on 6 December.
APLS vice president Tokong Pertin, general secretary Batem Pertin and organizing secretary Dr Pegba Ringu were also present.
In Assam, the Asom Sahitya Sabha celebrated Dai’s birth anniversary by lighting lamps at all its branch offices, while the Assam Pensioners Association, Guwahati, celebrated the day by paying floral tributes to the portrait of the late author.