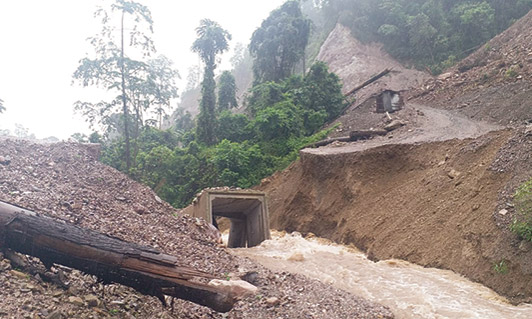 [ Karyir Riba ]
ROING, Jun 2: A portion of the Roing-Pasighat highway was washed away on Tuesday morning due to continuous rainfall in the region.
Dambuk SDPO SK Lenka informed that the temporary culvert on the route at Mekong, about 3 kms from Sisar bridge in between Dambuk and Sisar, has collapsed following heavy rain. The road was a temporary one and had been built for public use to facilitate disturbance-free construction of the permanent road.
“The permanent road was opened for use just a few hours after the incident took place,” Lenka said, adding that “there has been no casualty because of the washed-off section of the highway.”