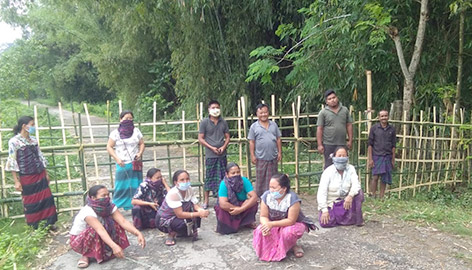 [ Pisi Zauing ]
KHAGAM, Jun 6: Following the sudden spike in Covid-19 positive cases in neighbouring Diyun circle of Changlang district, the villagers of Khagam Singpho, Khagam Mossang, Phup, Lewang, Khamuk and Pisi in Miao circle have unanimously decided to restrict the movement of people and vehicles in N’khumsang region.
The villagers have erected a makeshift bamboo barricade at Khagam Mossang village, on the Pisi-Manabum PWD road.
“People from Diyun circle will not be allowed to enter N’khumsang area, nor will anyone from the six villages be allowed to exit, in order to contain the spread of the virus,” Miao Singpho Ramma Hpung (MSRH) secretary-general Gamseng Singpho said.
He said that “only rare cases of medical exigencies and vehicles deployed for transportation of essential commodities will be considered for movement.”
The barricade has been erected after the matter had been discussed in a meeting held at the ADC office here on 4 June. It was attended by, among others, Minister Kamlung Mossang, ADC Tage Rumi, DSP Tasi Darang, MO Dr H Jongsam, and prominent public leaders of Miao.
The villagers of N’khumsang have been urged to make it mandatory to wear facemasks and maintain social distance.
“The names of anyone found guilty of violating the laid down standard operating procedure/lockdown protocol will be forwarded to the authority for stringent action under the National Disaster Management Act,” the MSRH said.