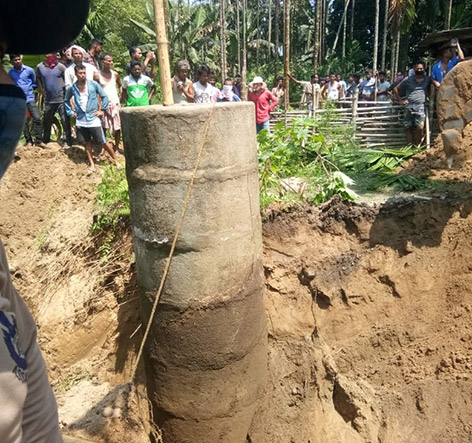 Staff Reporter
ITANAGAR, Jun 9: In a tragic incident, four people died in a well in Durpang village, in Papum Pare district, on Tuesday due to insufficient oxygen.
The deceased have been identified as Techi Kojum (24), from Chessa village; Mani Kumar Deori (37), from Deorigaon, Assam; Ajay Chakma (28), from Kokila No 1; and Sukroraju Chakma (48), from Kokila 1.
Capital SP Tumme Amo informed that the incident occurred at around 10 am, when Mani Kumar Deori was summoned by one Techi Galo to clean up his well.
“While cleaning, Mani Kumar Deori fainted due to insufficient oxygen inside the well. Seeing him gasping for air, people were terrified and
starting shouting for help. Then Techi Kojum, brother of Techi Galo, went into the well to rescue Mani Kumar, and he also fainted and fell,” the SP said.
“More people started gathering near the well after Mani Kumar and Techi Kojum fainted inside it,” he said. “Later, one Ajay Chakma volunteered and descended into the well with the help of a rope, but he too fainted and could not come out.
“Alarmed by Ajay Chakma’s fainting, his father, Sukroraju Chakma, went down the well with the help of a rope to save Ajay and the two others. Sukroraju fainted too,” the SP informed.
The SDRF team from the Narayanpur police station in Assam was called in to carry out rescue operation. The team informed that insufficient oxygen inside the well was the reason behind the deaths.
Meanwhile, the Banderdewa PS OC and the Naharlagun SDPO rushed to the spot. By the afternoon, the bodies of Ajay Chakma and Sukroraju Chakma were retrieved by the SDRF team and police personnel from the Narayanpur PS, along with personnel from the Chessa outpost and local people, the SP added.
The rescue team had to dig 20 feet to retrieve the bodies of Techi Kojum and Mani Kumar Deori by 8 pm.