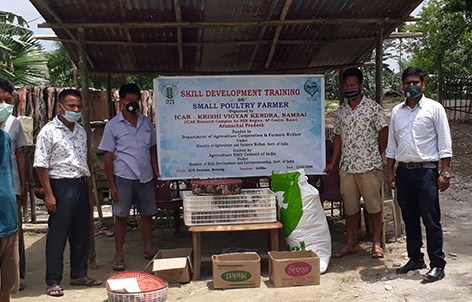 NAMSAI, Jun 10: Taking forward the dream of self-reliance, the local livestock farmers here have started producing day-old chicks (DOC) of improved variety with the guidance and supervision of the Krishi Vigyan Kendra (KVK) here and ICAR RC NEH, AP Centre, Basar.
Non availability of DOC and chicken due to ban imposed on transportation of livestock, including poultry and poultry products during the nationwide lockdown period prompted the members of the livestock grower association to produce DOC locally, according to a KVK release.
They approached the KVK for producing DOC locally to meet the demand and the KVK scientists shouldered the responsibility.
The KVK provided the association three egg-hatching machines under the TSP project funded by ICAR RC for NEH Region, Barapani. At the same time KVK, Namsai also set up few well-organized and scientifically managed poultry units at village level for production of fertile eggs.
Scientists of the KVK, especially Dr Binod KD Borah worked out the entire strategy of operation, starting from production of fertile eggs at village level to production of DOC and its marketing.
The KVK also conducted a month’s skill training for 23 small poultry farmers under the banner of Agriculture Skill Council of India. Trainees are reported to be engaged in rearing poultry through scientific approach, production of fertile eggs, hatchery management and marketing of poultry and poultry products.
The production of improved variety DOC are now a routine practice in Namsai district and the farmers are capable of producing around 1500 of DOC per batch from the three hatching machines at an interval of 21 days.
The chicks are being sold at Rs 50/chick to the farmers of Namsai, Lohit and Anjaw districts. The hatchery owners earn around Rs 45,000 to Rs 50,000 per batch.
Apart from involvement in production of DOC, the KVK is now actively involved in formulation and preparation of concentrated feed for livestock and poultry with locally available feed ingredients in order to reduce the cost of production. It has already distributed maize and soybean seeds to the farmers for bulk production.
The members of the FPO expressed gratitude to Dr Borah and head of the KVK Dr D Sasmal for their support and guidance.