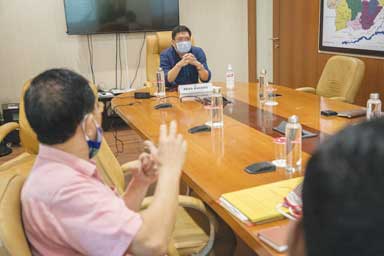 Chairing a meeting with the department’s officers at his office here, the CM said the process must be completed within a fixed timeframe.
“All requirements of government establishments will be procured from local producers only, through the textiles & handicrafts department. This will not only boost our self-sustainability but also benefit our local producers, who at the moment are suffering due to want of markets to sell their products,” Khandu said.
Commending the department’s initiative of producing Eri silk-based facemasks with traditional tribal designs for distribution among the healthcare workers and police personnel and at the state secretariat, he urged the department to focus on tying up with local producers.
“While framing the guidelines, provision needs to be kept that requirements of a district should be met up from producers of that particular district, so that everybody gets equal opportunity to benefit from the initiative,” the CM said.
Accepting the suggestion for issuing an advisory to all state government employees to don a local tribal attire of choice at least once a month, Khandu requested the chief secretary, who was also present, to take note and act as required.
The central government’s Scheme of Fund for Regeneration of Traditional Industries (SFURTI), under the MSME sector, which is yet to be tapped by the state government, was also discussed.
Under this scheme, traditional industries and artisans are organized into clusters to make them competitive. They are provided with support for long-term sustainability, sustained employment and enhanced marketability, and traditional artisans are equipped with improved skills.
The textiles & handicrafts department is in the process of identifying NGOs for setting up 25 such clusters in the state.
Meanwhile, the department has proposed to upgrade all its production centres in the state, and to procure and install power looms.
Besides targeting to impart training and supply queen bees and bee boxes to about 360 beneficiaries this year, the department plans to upgrade the beekeeping centre in Sille, in East Siang district.
The department also proposes to procure and sell all textile products, including Eri and Muga silk, handicrafts, and wood, bamboo and cane furniture.
While acting as the nodal agency between local artisans and customers, the department will have control over the quality as well as the prices. (CM’s PR Cell)