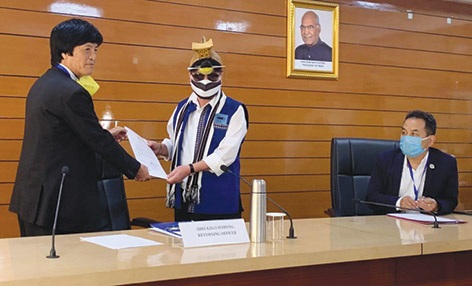 Staff Reporter
ITANAGAR, Jun 12: Former legislative assembly speaker and cabinet minister Nabam Rebia has been elected unopposed as member of Rajya Sabha (RS) from Arunachal.
This is the third time since 1996 that Rebia has been elected to the Rajya Sabha. He had earlier served as a Rajya Sabha member from the Congress party from 1996 to 2002, and from 2002 to 2008.
Legislative Assembly Secretary, Kago Habung, who was the returning officer, handed over the election certificate to Rebia in the presence of Chief Minister Pema Khandu, DCM Chowna Mein, Speaker PD Sona, the council of ministers, and MLAs.
With Rebia’s election as RS member, Arunachal has now become a complete saffron state as all three members of parliament from the state are from the BJP.
On the sideline of the election certificate handing-over ceremony, the chief minister said, “It’s a proud moment for everyone that in the history of Arunachal Pradesh, all three members of parliament are now from the BJP. It’s a historic moment.”
The chief minister thanked the other political parties for giving their mandate to Rebia and having faith in the leadership of Prime Minister Narendra Modi and the BJP.
The DCM also congratulated Rebia.
“Being a Rajya Sabha member is a challenging job these days. Most of the intellectual debates, be it on state issues, national issues or international boundary issues, we have full faith that Rebia would make our voice heard,” Mein said.
Speaking to media persons, Rebia thanked Prime Minister Narendra Modi, Home Minister Amit Shah, BJP general secretary Ram Madhav, party president JP Nanda, Khandu, Mein, MoS Kiren Rijiju, Lok Sabha MP Tapir Gao, state BJP president Biyuram Wahge and other political parties for supporting him.
“The party has faith in me. I will try my best to live up to the expectations of the people of Arunachal Pradesh in the Rajya Sabha,” he said.
None of the other political parties in the state fielded a candidate in the Rajya Sabha election.
“JD (U) is an NDA partner. It was our party’s direction to support the BJP candidate. JD (U) has been giving unconditional support to Pema Khandu’s leadership. Whoever was chosen today, he is a vibrant, dynamic and experienced leader,” said JD (U) MLA Hayang Mangfi.
NPP MLA Tapuk Taku also said that his party supported the BJP’s candidate as the NPP is in alliance with the BJP in the state and at the Centre.
Describing Rebia as an experienced leader, the lone PPA MLA, Kardo Nickyor, said “the BJP has chosen an experienced leader like Rebia. The PPA has to support it.”