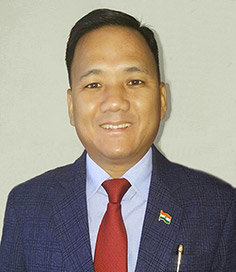 Staff Reporter
ITANAGAR, Jun 12: The state government has appointed Toko Onuj, general manager (HR) of the Hydro Power Development Corporation of Arunachal Pradesh Limited (HPDCAPL), as the
first chairman-cum-managing director (CMD) of the HPDCAPL.
Onuj, who took over the charge here on Thursday, has become the first person to be appointed as the CMD of a government-run corporation in the state.
He has been serving as the corporation’s GM for more than eight years. Onuj, who holds an MBA in power management from the National Power Training Institute, and a BTech in electronics engineering from the Kamla Nehru Institute of Technology, is a native of Talo village in Lower Subansiri district.
Speaking to the press, he assured to work hard to take the HPDCAPL to newer heights. “The state government has given massive responsibilities to me. I will try to work hard to justify the trust. We will work with the motto of taking everyone along for a better Arunachal,” he said.