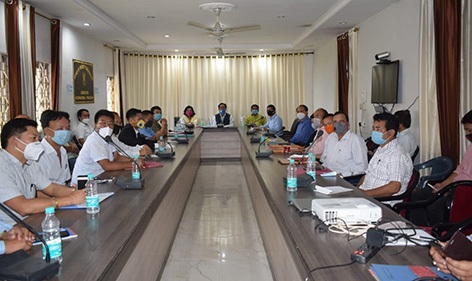 LONGDING, Jun 20: RWD Minister Honchun Ngandam reviewed the Covid-19 preparedness and developmental activities in Longding during a meeting with the district’s HoDs here on Saturday.
The meeting was also attended by local MLA Tanpho Wangnaw, DC Cheshta Yadav and SP BB Reddy, besides the DMO and the nodal officers of various quarantine centres.
The DC informed that most of the stranded people of Longding have been brought back, and that lesser number of them is expected to arrive in future.
“However, the administration cannot close the quarantine centres even if no more returnees are expected,” she said, explaining that “it would be difficult to rework all the arrangements once the momentum is broken.”
MO Dr Wangnai Wangsu on behalf of the district surveillance officer presented a statistical report of the returnees, the number of tests done, and the number of inmates released for home quarantine from facility quarantine so far.
Regarding security arrangements, the SP informed that adequate security personnel have been deployed at all the porous boundary areas, like Chating village bordering Nagaland, Kamkuh Russa bordering Assam, and the Kanubari check gate.
The Kanubari ADC informed that the management of the check gate has improved with the help of the deputy commissioner.
Responding to the grievances voiced by the MOs, the MLA assured to make arrangements for providing food to the medical personnel deployed at the Tissa check gate, and to set up a restroom for the staffers in Tissa.
The issue of poor customer service by the SBI branch here was also raised during the meeting.
The minister sought an explanation from the branch manager (BM) in-charge as to why the bank’s service has not improved even after the issuing of block-wise routine by the district administration.
The BM (in-charge), Tage Taker responded that the current strength of the staff is sufficient “as per Scale 2 bank protocol,” and opined that “if the bank is upgraded to Scale 4, the service can improve and cater to the need of some 30,000 odd customers.”
“Only 50 percent of the mentioned accounts are active. The upgrading will also increase the retention capacity of the bank, which will lessen the ever increasing crowd,” Taker said.
Regarding the issue of the defunct ATM, he informed that it is yet to be repaired as the engineer in Guwahati (Assam) has not reported despite several requests due to the coronavirus pandemic.
Ngandam urged the DC to “bring the engineer under essential service guidelines and sort out the issue at the earliest.”
Later, the EEs of the PWD, the RWD, the PHED and the WRD presented reports on the ongoing schemes, while officers of the DAO, the DHO and the APEDA presented briefs on their departments’ developmental activities. (DIPRO)