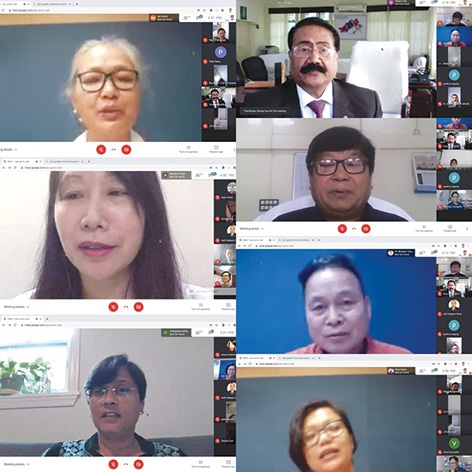 RONO HILLS, Jun 20: Two hundred and fifty participants from various parts of the country attended a webinar themed ‘Gender dialogues: Stereotyping and bias, equality and women’s rights in the digital age’, organized by the Institute of Distance Education (IDE) and the Women’s Studies & Research Centre (WSRC) of Rajiv Gandhi University (RGU) here on 19 June.
Following the opening remarks by WSRC Director, Prof Elizabeth Hangsing, RGU Registrar (in-charge), Prof Tomo Riba spoke on the need to abolish gender disparity, while Vice Chancellor, Prof Saket Kushwaha said “it has been an endeavour of RGU’s to promote gender equality in the university workspace.”
Jarjum Ete, one of the leading social activists of Arunachal on women’s rights, spoke on the intricate ways in which gender distinction works in the tribal societies in particular.
She also raised the issue of reservation for women in the parliament, which is pending since 1996.
Activist and lawyer, Dr Alana Golmei enumerated the legal aspects of women’s rights guaranteed by the judiciary and the constitution, and Banaras Hindu University Professor Madhu Khuswaha spoke on how the stereotypes about women are created and propagated by society.
Prof Khuswaha stressed the need to “make a collective effort to dispel such stereotypes which are detrimental for the society.”
RGU Pro-VC, Prof Amitava Mitra shed light on the demography of the parliament and spoke of how “the population representation of male-female ratio is not seen in either of the houses.”
Among others, IDE Director, Prof Ashan Riddi, Prof Jumyir Basar of RGU’s Arunachal Institute of Tribal Studies, Joint Registrar (Academics), Dr David Pertin, and IDE Assistant Professor Moyir Riba addressed the webinar.
The programme was organized in collaboration with the University Grants Commission.