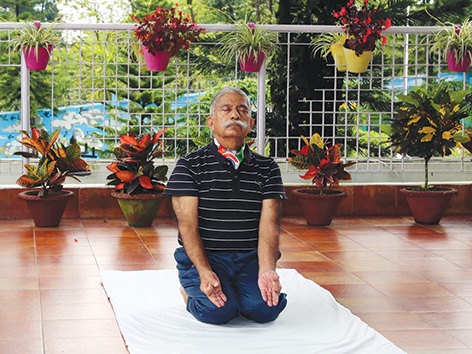 ITANAGAR, Jun 21: The 6th International Day of Yoga (IDY) was celebrated across Arunachal on Sunday with the theme, ‘Yoga at home and yoga with family’.
In Itanagar, Governor BD Mishra and his wife Neelam Misra celebrated the day at the Raj Bhavan with just a few family members, due to the Covid-19 situation.
Sharing his association with yoga, the governor said he learned yoga at the age of 40, after joining a resident yoga practitioner session at the Vivekananda Kendra in Kanyakumari (Tamil Nadu) in October 1978.
The governor called upon the people to practice yoga as a daily routine to avail its mental and physical benefits. He complimented Prime Minister Narendra Modi, “who has done a great service to mankind by getting 21st June accepted by the United Nations as the International Day of Yoga.”
Neelam Misra, who has been a yoga practitioner for the last four decades, thanked all the yoga gurus from whom she learnt and refined her yoga asanas.
“Mankind owes gratitude to Prime Minister Narendra Modi for promoting yoga, the noble Vedic Indian legacy, for the human cause,” she said.
In Anjaw district, the residents of Khupa joined the Anjaw KVK in celebrating the IDY with an awareness programme.
KVK Head, Dr Manish Kanwat encouraged the residents to adopt yoga in their daily life, while Hayuliang Electrical JE Shambhu Singh, who has been practicing yoga for 20 years, shared his experiences and spoke on the importance of “the physio-mental wellbeing of yoga.”
The residents actively participated in a yoga session led by Dr Santosh Kumar.
In Tirap district, government officials, police personnel, the DDSE, principals, headmasters and teachers of the district, along with their family members celebrated the IYD.
“The International Day of Yoga is a reminder that we must keep our mental, emotional, spiritual and physical health before anything else, and take time out to nourish and nurture ourselves with yoga,” DC Bhanu Prabha said.
Reports of IYD celebration was also received from Deomali.
The IDY was celebrated at the Rajiv Gandhi Government Polytechnic (RGGP) College in Itanagar also, with active participation by the faculty members and staff while maintaining the SOP in view of Covid-19.
RGGP Principal, AK Tripathy addressed the gathering and spoke about yoga and its relation to mental health. Various simple asanas, including surya namaskar, were performed by the participants, under the guidance of an expert. (With Raj Bhavan & DIPRO inputs)