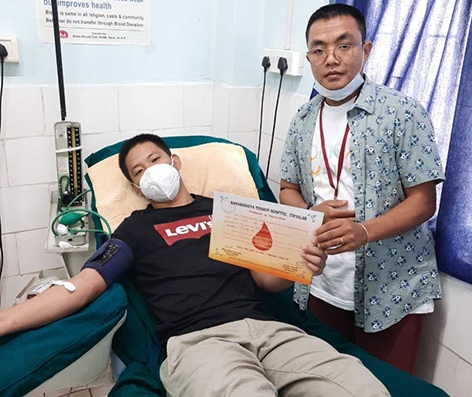 ITANAGAR, Jun 22: Thirteen units of blood were collected during an in-house voluntary blood donation camp organized by the Arunachal Voluntary Blood Donors Organization (AVBDO) at the RK Mission Hospital (RKMH) here recently.
Expressing gratitude to all those who were part of the camp, AVBDO chairman Ramesh Jeke informed that there has been a dire shortage of blood supply at the Tomo Riba Institute of Health & Medical Sciences and at the RKMH owing to the Covid-19-induced lockdown.
“Numerous cases, like chemotherapy, aplastic anaemia, haemophilia, premature babies, etc, are dependent on blood supply, but they have been put on hold due to shortage of blood, which is becoming a major cause of concern for our people,” Jeke said.
Reportedly, 25 to 30 blood transfusions are carried out in the hospitals of the capital region on a daily basis. There are also people who require whole blood as well as blood components such as pack cells, platelets and plasma on a daily basis.
Jeke appealed to the people of the state to recognize the seriousness of the issue, and requested everyone to shun their fear of visiting hospitals and step forward in such times by voluntarily donating blood.
The AVBDO is organizing another voluntary blood donation camp at the RKMH on 23 June, from 10 onwards, and the organization has appealed to all to come forward and donate blood.