Staff Reporter
ITANAGAR, Jun 25: A minor girl was buried alive when a landslide hit a residence in Donyi Colony here on Thursday morning. 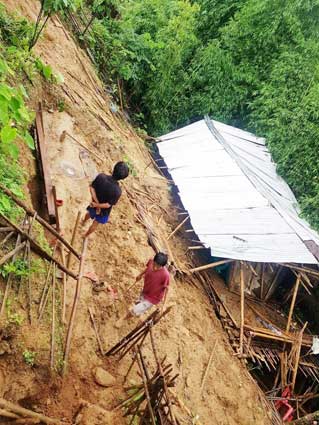 “Sources informed that the landslide, triggered by heavy rain, occurred at around 8:12 am. It damaged the house and buried the two-year-old child,” Capital SP Tumme Amo informed.
Reportedly, the mother of the deceased was busy washing dishes outside the house when the landslide hit.
“On receipt of information, the SPDO, the OC and the officer on duty, SI N Nishant, all available force of Itanagar PS with PCR 4 and 5 with CRPF rushed to the spot,” said Amo.
In the meantime, the capital control room informed the SDRF and the NDRF about the incident. “Later, the SDPO and the Itanagar PS OC joined the team and managed to retrieve the victim’s body with the help of the colony’s residents,” the SP added.
When the body was brought to the RK Mission Hospital, the medical officer declared her brought dead.
An unnatural death case (No 13/2020 u/s 174 CrPC) has been registered at the Itanagar police station and the matter is under investigation, the SP said.
Chief Minister Pema Khandu expressed deep shock and sorrow over the loss of the child’s life.
Conveying heartfelt condolences to the bereaved family, the CM announced immediate release of ex gratia of Rs 4 lakhs to next of kin of the deceased.
Khandu directed the district administration and the disaster management department to continuously monitor the situation.
In another tragic incident, a woman drowned in the Lagun river near G Extension in Naharlagun on Wednesday evening.
Reportedly, the woman was returning home from her shop when she drowned in the river while crossing it. Her body was recovered from Nirjuli on Thursday morning.
The CM expressed shock and sorrow over the incident and conveyed condolences to the bereaved family.
He appealed to the people living in the lowland areas to shift to safer places, and requested those residing in landslide-prone areas to also immediately get to safer locations.
The CM has issued directives to the deputy commissioners and the disaster management department in the districts to monitor the situation on a regular basis
DIPRO adds: Capital Complex DC Komkar Dulom along with DDMO Moromi Dodum Sonam visited Donyi Colony, where the minor girl died in the landslide, and handed over immediate relief for the damaged house to the father of the deceased.
They assured to help the bereaved family in completing the formalities for issuance of further financial assistance from the government.
The DC has time and again appealed to the people living near riversides and landslide-prone areas to move to safer locations during monsoons.
An ‘alert advisory’ has already been issued in this regard, and public announcements are being made from time to time.
“All forms of earth-cutting on the slopes should be avoided as the soil is very sandy and loose. Even if houses are constructed, local high-rise traditional bamboo houses be constructed without disturbing the landform on such slopes. Optimum height of the building be maintained, so that in case of mudslide, it should slide beneath the house, causing minimum damage to life,” the advisory read.
Tali MLA Jikke Tako accompanied the DC and the DDMO during the visit.