Staff Reporter
ITANAGAR, Jun 25: PHE&WS Secretary Rinchin Tashi on Thursday inspected the ongoing water supply projects being implemented under the RIDF and the NEC by the Bomdila PHED at Buragaon and Jameri in West Kameng district. 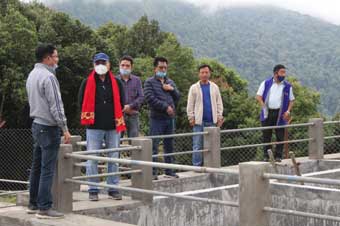 Emphasizing the necessity of providing potable drinking water supply to all, the secretary urged the field functionaries of the department to “work dedicatedly to the cover all habitations with 100 percent functional household tap connections (FHTC) coverage under the Jal Jeevan Mission (JJM) within 2024.”
Commending the “team spirit” of the Bomdila PHED led by EE Niapung Konia, Tashi cautioned that those who fail to perform and achieve the target under the JJM would not be tolerated.
“JJM is time-bound, which cannot be compromised due to a few insincere officials,” he said.
The secretary acknowledged the progress and the quality of work with regard to both the projects, and told the EE to get the works that had been suspended due to Covid-19 resumed at the earliest.
Konia gave assurance that the projects would be completed within the current financial year “if the full fund is given.”
He briefed the secretary on the preparations being made to get the project in Jameri inaugurated at earliest. He said FHTC have already been provided to all the households there from the project.