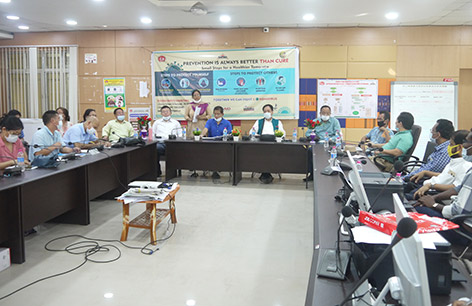 NAHARLAGUN, Jun 30: Two senior officers and a peon of the health department were given a warm send-off at the DHS conference hall here on their superannuation on Tuesday.
Dr Allok Yirang earned his MBBS in 1983 from the Assam Medical College, Dibrugarh. He then joined as junior medical officer at the Koyu health unit in November 1983. Thereafter, he served in Tezu, Roing and Anini as MO, medical superintendent and DMO, respectively. After that, he was posted as the first DMO of Yingkiong in September 1996, and went on to serve as DMO of East Siang and Dibang Valley districts.
He also served as the first DMO of Lower Dibang Valley in 2003. He was then posted to the DHS office in June 2014, where he discharged his duties as Joint DHS, NVBDCP & establishment. Later, he served as additional DHS, and then as director of family welfare till his superannuation.
Dr Chow Jeamaw Mongmaw earned his MBBS from SBC Medical College, Orissa, in 1987. He joined the state health service in September 1987. After serving in places like Tezu, Walong and Lathaw, he was transferred to the Lower Subansiri district hospital in Ziro, where he served for more than four-and-a-half years.
Thereafter, he was transferred back to Lathaw. After that, he was posted as deputy director of family welfare, Naharlagun, in September 2016, where he continued to discharge his duties till his retirement.
Peon Pake Donyi, a resident of Daporijo, who had joined the department in November 1980, also retired.
The function was attended by officers and staffs of the DFW and the DHS, and was chaired by Health Director Dr Moromor Lego.