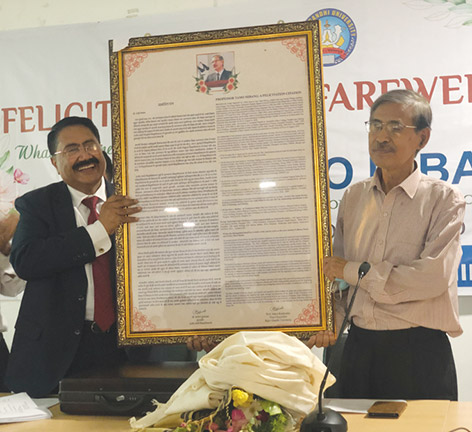 RONO HILLS, Jun 30: Rajiv Gandhi University (RGU) bade farewell to Prof Tamo Mibang, a doyen of tribal studies and the university’s first Arunachalee vice chancellor, who retired after 41 years of path-breaking academic career.
“Prof Mibang’s contribution and achievements in the field of academia and academic administration is unparalleled and will be inscribed in golden letters in the history,” said a statement from the university.
“Professor Tamo Mibang, through his academic discernment, has contributed exponentially in the field of academics in Arunachal Pradesh in particular and the nation at large. His contribution to the society is impeccable and endearing.
“The initiation of his academic voyage was set to sail when he joined as a lecturer under the government of Arunachal Pradesh at Jawaharlal Nehru College, Pasighat. He worked there from 1978-1988. His next destination was undertaking the task of a reader in the department of history at the then Arunachal University (Rajiv Gandhi University) from 1988-1995.
“Before joining as the vice chancellor of the university, he had served as a professor at the Arunachal Institute of Tribal Studies (AITS), RGU, from 1995-2012. After completion of his stint as the vice chancellor of the university, he rejoined the AITS department on 2 August, 2018,” RGU stated.
As a researcher of unwonted eminence and authority, he has to his credit 16 books and 46 research papers published in reputed international and national journals, besides 32 radio talks and several unpublished lectures and talks delivered on various occasions, both at academic and administrative forums.
Prof Mibang has been on expert panels of recruiting, funding and award-granting bodies like the Indian Council of Historical Research, New Delhi, the Sahitya Akademi, New Delhi, the Research Institute of World’s Ancient Traditions Cultures & Heritage, Roing, and several other hallowed institutions, the university said.
Prof Mibang also acted as the chief consultant for ‘The tribal transition: Cultural innovations in Arunachal Pradesh’, a major project undertaken in collaboration with the School of Oriental and African Studies, University of London, the British Museum, the CCRD, and the Arunachal University from 2002-2007.
“Prof Mibang has played a pivotal role in RGU’s promotion from state university to a central university,” it added.
As part of the farewell ceremony, Prof Mibang was taken on a tour of the university on Tuesday by Vice Chancellor, Prof Saket Kushwaha.
Prof Kushwaha praised Prof Mibang “for his uncountable contributions to the state and the nation.
“Though professor Mibang is leaving the university, he will remain with us forever,” Prof Kushwaha said, and addressed Prof Mibang as “a living legend of the university.”
“The virtues of patience, discipline and integrity of Prof Mibang is something each one at the university must try to emulate,” Prof Kushwaha said.
Prof Mibang in his farewell address asked everyone to carry forward the legacy that has been created and nurtured by him.
He stressed on the need for teamwork, and said, “I see great potential in the youth of this university, and the only need is to provide them with opportunities.”
RGU Registrar, Prof Tomo Riba read a self-composed poem dedicated to the life and work of Prof Mibang.
RGU Pro-VC, Amitava Mitra described Prof Mibang as a “kind, helpful, benevolent mind and a living legend.”
Prof Mibang’s farewell was also marked by the launch of the new RGU website and the bilingual monthly edition of the Rono Post.