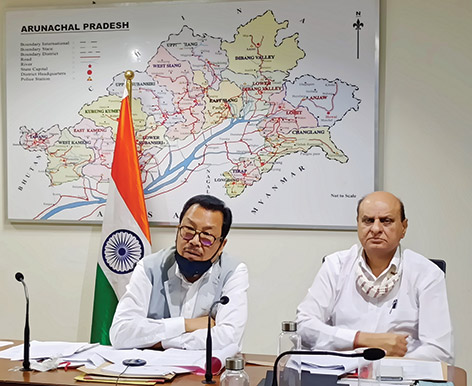 ITANAGAR, Jul 3: Deputy Chief Minister Chowna Mein has urged the central government to provide adequate financial assistance for improving the power infrastructure in the state.
Addressing a meeting of the power ministers through videoconference on Friday, Mein said, “Arunachal needs adequate financial support for replacing and improving old power infrastructure, such as transmission lines, power substations, transformers and high-voltage distribution system.”
He said a major portion of the existing power infrastructure in Arunachal has been there since the NEFA days, “except some infrastructure created recently under the DDUGJY and the Saubhagya scheme.”
The DCM requested the union MoS for Power, RK Singh to enhance the 15 percent grant for smart metering and billing to 50 percent under the totex model, stating that “the amount of recovery from each consumer will be costly.”
He informed the union minister that the remaining work under the integrated power development system and the Deen Dayal Upadhyay Yojana are likely to be completed by December.
Mein said that the proposed amendments in the Electricity Act, 2003, should not take away the rights of the state, stating that “the matter pertains to concurrent list.”
He also requested that “the Power Grid Corporation of India Limited may be pulled up to complete the comprehensive transmission scheme in the state which was started in 2015 and still going on.”
Highlighting the state’s hydropower potential, the DCM informed that till date the state has harnessed hydropower from the Ranganadi HEP (405 mw), the Pare HEP (110 mw), Kameng (300 mw) and Dikshi (24 mw), besides 63.4 mw from 128 small hydro projects.
He said that while the 2000 mw Subansiri HEP is set to be completed by 2023, “the state government is making all efforts to resolve the land acquisition issues related to the 2880 mw Dibang Multipurpose Project, including litigation pending in the high court, as soon as possible, in consultation with the NHPC and the affected people.
“The Demwe Lower HEP (1750 mw) is pending in the national company law tribunal,” the DCM said, and added that the state government is exploring ways to get direction from the high court for expeditious disposal of the matter.
Mein informed that the state government has issued notices to 74 non-performing power developers, while 27 projects have been terminated and referred to the power ministry “for allotting them to any central public sector undertakings.”
The DCM also reminded the union power minister of the state government’s comprehensive plan developing 135 small hydro projects of 356 mw capacity each across the 25 districts of the state, “the concept paper of which was already submitted to the central government.”
Among others, Power Commissioner GS Meena and the CEs of the power and the hydropower departments attended the videoconference. (DCM’s PR Cell)