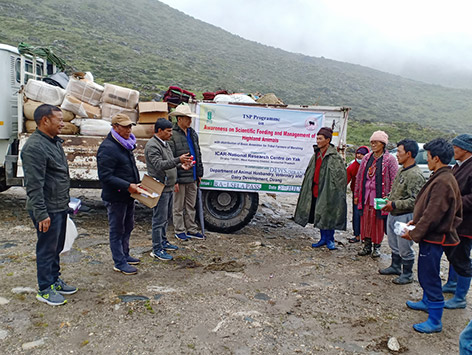 LUBRANG, Jul 3: Scientists and staff from Dirang-based National Research Centre on Yak (NRCY) along with staff of the animal husbandry, veterinary & dairy development (AHVDD) department conducted a supportive programme for Brokpa yak herders here in Tawang district on Thursday.
Owing to the Covid-19 pandemic, the traditional migratory route of the yaks of the Brokpas of Lubrang and Mandala villages has been sealed by the Bhutanese government, preventing them from reaching Luguthang and Mago, which are the summer grazing areas of the yaks.
As a result, the Brokpas are stuck in Sanyga GG and the rocky areas in Sela Pass. In fear that their animals might contract Covid-19, the farmers approached the NRCY for assistance. The Dirang Employees Welfare Society (DEWS) also requested the NRCY director in this regard.
During Thursday’s programme, which was conducted in collaboration with the DEWS and the AHVDD department, the farmers were briefed on scientific feeding, breeding and reproductive and health management issues of their animals by NRCY senior scientist, Dr D Medhi.
The farmers were also apprised of “the hygienic aspects for clean milk production and value addition of their products,” according to a release from the NRCY.
The beneficiaries were provided with concentrate yak feed, common salt, chelated mineral mixtures, and basic veterinary medicines.
NRCY Administrative Officer (in-charge) N Khochiliu and DEWS president Dor Phunchu also spoke.
Six herders, owning nearly 300 yak/yak cattle hybrids, benefitted from the programme.